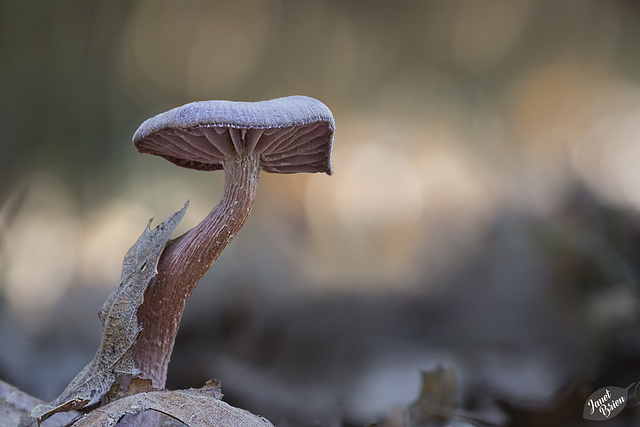 (+10 insets!) (Please scroll down to Today's Insets and Final Thoughts about Photography at Joseph Stewart for added picture information)

This will be my last set of nature pictures from our trip to Joseph Stewart State Park (I have another set of metal detector finds to finish off my trip pictures). My main image is one of my very favorite macro subjects!

For the Love of Mushrooms
Have you ever gone out with the specific intention to find mushrooms? They aren't always easy to locate! On my first outing with my macro lens, I kept my eyes open for mushrooms while I took pictures of leaves and other things but I didn't see any. I wasn't really focused on them at the time though and I figured there were plenty of them in deeper forest locations. The next day, Steve and I went on a favorite walk which took us past the edge of a thick stand of trees. Ah-hah! That's where they were hiding! There were bunches of them just off the side of the path and a little while later I came back with my camera to take pictures.

One of the things that made it hard to find them were all of the leaves covering them up. I kept my eyes open for curious lumps in the piles of leaves I saw and often revealed a wonderful prize underneath with a careful brushing.

When I take pictures of mushrooms, I do a lot of preparation beforehand. I remove anything I can that obscures or detracts, especially from the background. All it takes is one stem behind a subject to totally ruin an otherwise lovely bokeh, so I'm fastidious about making the scene as tidy as possible. I've learned though that taking time beforehand will make it much easier when I'm processing the image later.

The mushrooms I found at John Stewart were almost all hiding under leaves and I wanted to share that experience if I could. As I uncovered them and cleaned up each scene, I tried to keep a leaf or two exactly where it was if it enhanced the image.

As I revealed this mushroom, I got a huge smile on my face. Cuddled against it was a partially disintegrated black oak leaf. Wearing this leafy cloak of courage, the brave little mushroom turned to peer up at me and my huge, imposing camera. It watched curiously as I cleared the area, carefully pulling bits of grass and twigs out of the way. I cooed gently to soothe its trembling when I reached down to remove a bit of dirt from its head. The warm sound of my voice must have been strange but it relaxed and appeared to be happy now.

There! Everything was just perfect and I crawled backwards to compose and capture a set of images. While I clicked my way through apertures, I thought about the nice time I had taking these pictures of mushrooms. So many different kinds, sizes and neat groupings. As I gazed back at the darling mushroom and its little leaf, I knew this was my favorite one of all.

Today's Insets and Final Thoughts about Photography at Joseph Stewart
The fun subjects never ended as I wandered around…the first inset looks a lot like a cluster of grapes but it's actually a dried bunch of flowers on a bush, magnificently lit up in the autumn sunshine. I was so happy to get the chance to get some fall pictures because I didn't go out on any seasonal photo shoots. I had hoped there would be some nice pictures to find at Joseph Stewart and I sure did hit pay dirt! You will see lots of leaves that I liked (including one sitting next to the water hookup valve at our site), another colorful meadow scene, a pine cone, and even a stump that was totally covered with lovely bracket fungus! I didn't spend too much time with my camera while we were at the park--perhaps an hour at most?--and yet, look at all of the wonderful things I found. What fun it was to relax and melt into my passion. :)

Pam, I'm hoping that you're feeling better today…I know you said it's been very painful after your procedure. Wishing for a day of comfort and anticipation for the next steps in your recovery! *BIG HUGS* :)

Suggested groups:
53 comments - The latest ones

A superb fungi image the composition and focus are wonderful Janet, I have suggested you try adding it ima frontpage you may not be able to crop it to meet their criteria but worth trying
19 months ago. Edited 19 months ago. | Permalink

Wonderful set of shots, love the landscape one in the PiP's.
19 months ago. | Permalink

A wonderful series. PiP 6 is my Fav!
19 months ago. Translate | Permalink

Oh these pictures are just stunning, Janet. The lovely little mushroom is so sweet, but it does look cold, so no doubt your warm breath on it as you spoke to it, must have felt so good to it.

I never think of brushing away detritus from my subjects, I didn't want to spoil a natural sight. As you say though - it does enhance the view etc.

I can't decide which is my favourite, they are all fantastic. Thank you so much for showing us this amazing collection of pictures. To think you found all these superb little pictures in only an hour - wow. That place must be fantastic to visit.
19 months ago. | Permalink

JANET.. THIS SOUL IS EXQUISITE ! STANDING PROUD AND RESOLUTE.

THE LIGHT THERE WAS DIVINE.

THANKYOU FOR SHARING THIS BEAUTIFUL PLACE.

I AN STILL SORE BUT IT IS GRADUALLY EASING.

Your selection of picture so amazing. You captured magnificent photography.
19 months ago. Translate | Permalink

delightful autumnal series, the first one in extraordinary !
19 months ago. | Permalink

Janet, for the group # Frontpage Photography # , it would be necessary to change the format to 16:9 and to remove the signature according to the Guidelines of this Group. Would be great if you made the necessary adjustments. Thank you.
19 months ago. | Permalink
Janet Brien club
has replied to * ઇઉ * club

Thank you very much for letting me know--I was prompted to add my picture with the subtext that I'd probably need to change some things. I'll do that now! :)
19 months ago. | Permalink
* ઇઉ * club
has replied to Janet Brien club

You're very welcome, Janet, and thanks for the revised copy. It's a beautiful result. :)
19 months ago. | Permalink

The mushroom image is perfect. Great job!
19 months ago. | Permalink

Wow! A whole posting full of close-up and macro shots........all bar one! What a treat!

It may be the odd-one-out, but your landscape shot is just stunning Janet. Beautifully composed and taken.

The main image is a belter of a shot..........I love the shape of it's stem and you've captured it in perfect detail, especially the gills and those lovely leaves. The background is sublime!

More than I can take in, but a wonderful array indeed!
19 months ago. | Permalink

I love the sensuality of the stem of this mushroom, the way in which it has bent round the leaf. Gorgeous bokeh too. The bracket fungi, (I have seen a lot of these too but not caught a good photo of them) resemble shells. A superb autumn series, Janet.
19 months ago. | Permalink

Wow! What a wonderful series of incredible details! Great!
19 months ago. Translate | Permalink

Your main shot and the first PiP are magical Janet. I haven't made too many comments on your other pictures that I have missed in the past month, but have given many stars and can assure I have very much enjoyed viewing them all :-))
19 months ago. | Permalink

What a great series! Nature is wonderful. The mushroom on the main picture looks beautiful. I like it how the leaf leans against the stem of the mushroom.

The insets are great too. The autumn leaves shine magically and the tree fungi form an interesting pattern.
19 months ago. | Permalink

This picture has been choosen and finalised for the ipernity homepage.
It will be taken into the spring collection, if you give your OK directly underneath the processed picture, please: www.ipernity.com/doc/team/49546748
19 months ago. | Permalink

A beautiful set. I am in love with the title-image!
16 months ago. | Permalink

Nice composition, I love the anguished twist of the mushroom stalk. Mushroom look like they should be easy to photograph, but (from bitter experience) that is often not the case.
8 months ago. | Permalink