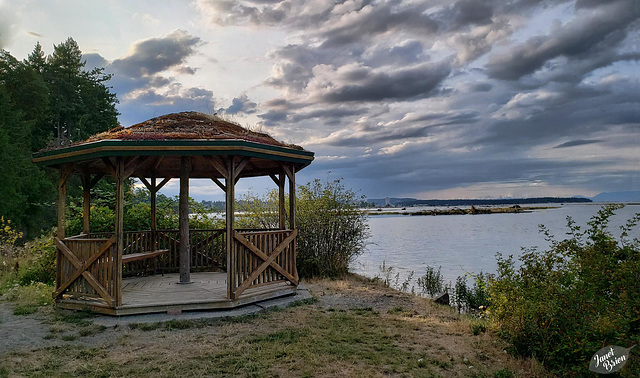 (+10 insets) (please scroll down for information about the insets!)

Boy, I'll tell you one thing about RV parks. They range in quality from one extreme to the other and some of them are so greedy and money-grubbing that they will stop at nothing to make a buck.

When we pulled into Living Forest RV Park, we got excited because we were so impressed by what we saw. Driving towards our reserved spot we were dazzled by the spacious RV sites tucked between groves of huge conifers, lots of room between each camping area--it looked super! However, when we arrived at OUR site, that elevated opinion quickly deflated. It turned out that our reserved location was part of a newly developed area and it was totally ridiculous to the point of being dangerous. The sites were crammed right next to one another with no trees and very few plants between them. In fact, there was barely enough room to put your rig into position. Incredibly, they had to build up the ground to make enough room. This meant that the dirt was soft and at the edges of the sites the dirt fell off down the hillside. They didn't even build embankments to hold the dirt in place! On top of that, trying to back a rig into the site was extremely difficult with almost no room for error. And just to add insult to injury, if anyone needed to drive by they would be stuck until we were in position. We have no idea what they were thinking except that it was high season and they needed more room in a hurry. In any event, Steve was totally infuriated (and my nerves were fried) after he spent 15 minutes trying to get the trailer backed into our site properly. Just when he nearly gave up and drove to the office to give them a piece of his mind, he was successful at inching the trailer into place, with no room to spare. Talk about stressful!!

That being said, if you ignored the area where our RV was located, the park was wonderful. During our trip, we learned that Vancouver Island has many marshlands and Living Forest sits right where the Nanaimo River empties out into the bay. The view was pretty from our campsite but when we hopped on our bikes and went down to the shore, we were awed by the beauty.

About Today's Main Image and Associated Insets
The marshland abutted a protected bay and there at the bottom of the Living Forest's hill was a boat launch and also a pretty gazebo (which is also the feature of today's presentation). Steve and I had a lot of fun with our panoramas but spent plenty of time staring out over the water too. I found some gorgeous woodland views that included the marsh through the trees. It was a wonder.

Later we decided to ride our bikes around the whole park. It was big enough (53 acres) that walking on every road would have taken quite some time so we were happy to have the excuse to take a bike tour. It was obvious that the park had been there for quite some time and in the wooded areas tucked away from ocean views we found the park's full-time residents. The condition of these RVs varied from nice to completely dilapidated but the folks we passed by smiled and waved hello.

The Story of Some of Today's Insets
Just as we were heading back to our RV, Steve put on the brakes and slowed to a stop in front of some odd artwork standing outside of a full-timer's RV. Hopping off our bikes we stood and stared. What the heck were we looking at, anyway?!

A group of animated-like characters in bright colors had our attention and we could see they were meant to be likenesses of tv cartoons, though we couldn't say which. Steve laughed aloud when he realized the commonality of every artwork. "PROPANE TANKS! They are all made from used propane tanks!" (Propane is the fuel used in RVs and every rig has at least a couple of these tanks.) I exclaimed in agreement, "YEAH!! Woah, that's so cool!!" Nearly every piece was made from a propane tank or oxygen cylinder, with other pipes and fittings used for legs and appendages. Old BBQ grills and other pieces found at an RV dumpsite were all put to artistic use and we chattered back and forth as we identified another item. We were delighted! How CLEVER AND FUN!

Though we couldn't identify some of the animated characters, we exclaimed out loud, "PIKACHU!" "BATMAN!" "A LEGO KNIGHT!" "STAR WARS TIE FIGHTER!" "THE ENTERPRISE surrounded by SHUTTLECRAFT!" "A PIRATE SHIP!" I looked up on a tree nearby and yelled, "LADYBUGS and a DRAGONFLY!" "A TRAIN LOCOMOTIVE AND CARGO CAR!" What fun we had!!

After looking online for a while, I discovered that the trio of animated characters we didn't recognize are from a show called "Rick and Morty", though I still cannot identify the hilarious-looking purple one. I found a Rick and Morty Wiki page that shows all of the characters but there are just too many to look through. If you find out which one the purple one is, please let me know! :D

Pam, have you ever been much of an animated show watcher? As a kid I love them to a degree but honestly, most were just too totally stupid and I couldn't stand them. Saturday mornings were always fun though, I'd sit and watch the garbage until noon. As an adult, I've always been crazy about anything Pixar of course. I used to enjoy Disney movies but they slowly descended in the realm of merchandised trash and I am generally disgusted by it all. On the other hand, Japan's "Disney," Hayao Miyazaki, is amazing, and the film, "My Neighbor Totoro" is my all-time favorite animated film, one that brings out my inner child and reduces me to tears upon every completed viewing. My favorite American animated film, "The Iron Giant" is a VERY strong second thought, and also turns me into a heap of blubbering tears at its end. Great stuff! *MANY HUGS from southern Oregon* :)

an other dream image Janet
enjoy this new week
19 months ago. Translate | Permalink

I ALSO LOVE THIS KIND IF SCRAP METAL SCULPTURE !!!

I NEVER HAVE BEEN A FIM OR TV WATCHER REALLY.

Another great series and write-up my friend. Well done.
19 months ago. Translate | Permalink

Wonderful pictures of a great landscape and great art objects - and a fascinating report!
19 months ago. | Permalink

Another great series, Janet. Yes, some caravan parks really do pack the sites ridiculously tightly. Thank you very much also for your concern on our well-being. We will have to watch fires with the expected weather over coming days, but we are home again (thank goodness, it's been chaotic at times) and feeling optimistic. Pauline's treatment is also progressing well.
19 months ago. | Permalink

Love the photo, the PiPs and your text ! A lot of greetings, Janet !
19 months ago. | Permalink

Excellent series Janet. Love those characters made out of cylinders.
Glad the stressful parking didn't spoil your trip too much
19 months ago. | Permalink

The main image is my favourite tonight, and the 2nd inset comes a very close second, but I love all the landscape shots................such fantastic scenery, except the the area immediately next your parking space!

I was fascinated by the home-made artwork..........some of it is really well done. I wonder if it\s to be sold or just for fun.

Been another busy day here.........just finishing of getting the last of the Xmas presents and rearranging the house so we can fit my daughter and the grandchildren in for a few days. I'd like to tidy up the garden a bit, but it won't stop raining and it's a bit of a bog at the moment.

Anyway, take care of yourselves. Are you going away for the holidays?
19 months ago. | Permalink

Funny artworks made of propane tanks :) A beautiful park to stay there and excellent images!
19 months ago. Edited 19 months ago. | Permalink

Fantastitc Janet I love these series, well done indeed its a joy to look at them
19 months ago. | Permalink

What an amazing place, Janet and what fantastic photos. I just adore your panoramas which show the beauty of this place. As for having big problems for reversing into your RV space, by the looks of things - those spaces are only big enough for your truck and a small tent. It must have been great riding around on your bikes in that gorgeous scenery.

As for those propane gas cylinder models - what fantastic work. You didn't mention the Minion on the right. I don't know the names of all of them neither. Whoever made them - is talented indeed. So much nicer than looking at empty propane cylinders!

I hope things are okay with you and Steve. You're back home now I guess. I'm going to be home on my own this Christmas, as I just can't manage to get to Turkey. My daughter-in-law is going into hospital on Friday to have her gall stones removed, so Tony is feeling torn between caring for her when she comes home, looking after the kids, doing his part time job too, and popping up to see me!!!! I told him to concentrate on his family needs at Christmas, and then come up to see me when things have calmed down. My neighbours have all invited me to share Christmas dinner with them, but if I can't be with my own family, I'd rather not be with anyone. I'm very touched and honoured that they would even bother to invite me, that shows how lucky I am to have them as friends too as well as neighbours.
19 months ago. | Permalink

The scrap metal sculptures are wonderful!!!

Best Wishes,, and a good weekend
Peter
19 months ago. | Permalink

Top Ipernity. A privileged location. A scene of great beauty perfectly captured. Have a nice weekend.
18 months ago. Translate | Permalink