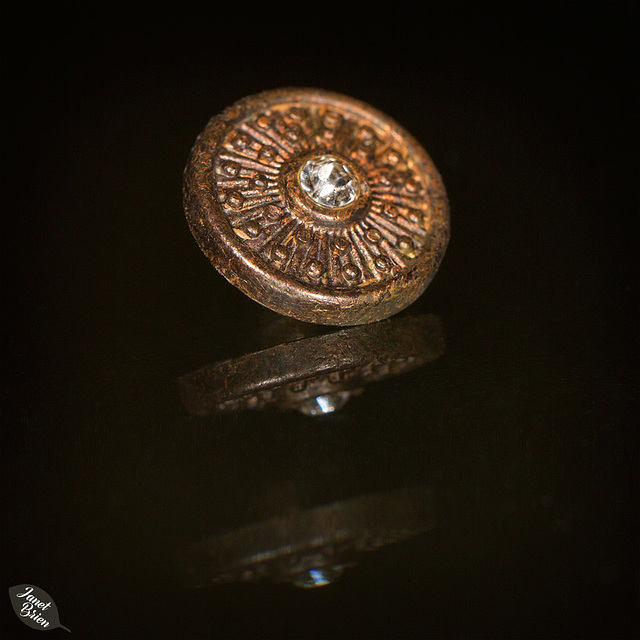 (+12 insets!) (Please scroll down to Today's Pictures for inset information)

OMG My Eyes! Turn Off the Light!
I was awoken this morning to the lights blazing overhead and the beep of power coming on in the house. In my bleary state I thought to myself, "Oh wow, we must have had a power outage." At the same time I was happy that the power was restored before we got up. We'd had a wind advisory last night, though it wasn't windy enough that we noticed. I guess it depended on where you were because the power lines came down somewhere.

Starting the Day with Pumpkin
Though I was so rudely awoken, it was a good time to get up, so up I popped! Pumpkin and I started our day as usual--she supervising my shower and laughing at me--and we whistled together as I dressed. While I prepared her cage she checked out the extremely interesting space between the bureau and the wall where I'd set her down, turning her head to peer with one eye into the dark abyss that so fascinated her. The funny gronking sounds she made to express her opinion made me laugh, and she followed suit, which made me laugh even more. What a silly bird, and how I love her! :)

Downstairs in the kitchen, I deposited Pumpkin onto her custom perch that Steve made--complete with food and water cups--where she enjoyed nibbling on warm, moistened seed-filled bread. While she looked out the kitchen window with great interest, she kept an eye on my activities as any proper supervisor should do. Whistling back and forth, laughing together and making silly sound effects, I made my coffee and got her food bowl ready. She's had this healthy blend for the nearly 20 years of her life with us since she was just 6 months old--a mixture of carrots, celery, bell pepper, corn and apple, topped with wheat berries, red pepper flakes, another piece of bread and a pecan--her glowing feathers and excellent health show that we're doing something right! :) Nothing but the best for our darling feathered child!

Soon we returned upstairs so she could have her breakfast. Apparently I wasn't moving fast enough because she strained towards her cage as we approached and hopped off my finger to turn and dance back and forth as I put her food cup in place and closed her cage door. I smiled as she gronked in happiness and dove into her food. What a doll.

Before I left the room I opened my laptop to play a music playlist from YouTube that she seems to really enjoy--"Happy Hawaiian Music"...but wait...

No internet. Hmmm, that was a problem…without her music, Pumpkin gets very fussy and yells very loudly to let us know that her tunes aren't playing. I checked the network and…yep. No dice. What was going on, I wondered.

Solving the Mystery of No Internet
Wandering into our game room, I noticed our router and modems were off…no power anywhere. Flipping the switch on the power strip didn't do a thing. My computer was on though, but I had no internet. Odd. I wondered if the fuse had popped and some of our devices were on that one? I went to the basement to check the fuse box. Everything was fine there.

The last thing I wanted to do was wake up Steve for his assistance but if I didn't, Pumpkin would soon start yelling, which would wake him up in a much less-pleasant way. Cringing inwardly, I opened the door to Steve's bedroom (we sleep separately because he snores and we finally realized it was the best solution so we could get a good night's sleep) and gently roused him. I was relieved that he didn't mind the wake-up as he wanted to start his day anyway. He confirmed the internet situation and was soon in the game room to investigate.

Peering at our computer setups, he saw the answer and said, "Two of the three UPS's (Uninterruptible power supply and surge suppressor) are off…must have happened with the power outage." He pressed the power buttons on each of them and they beeped and whirred back to life. A few moments later, everything was back to normal and Life Could Resume! :D

Today's Pictures
This is my last set from Joseph Stewart State Park--my second set of pictures from my metal-detecting adventure, along with my other treasures from home. My main picture is a bit of a mystery because I'm not exactly sure what it is. Could be the button on a shirt, the closure at the top of a child's pants, or maybe even an earring. There's a little hollow post centered in the back and I cannot figure out what it might be. Pretty though and a fine metal detecting prize to share today!

Insets include the other finds at the park--four recent pennies, a gloriously rusty tack,a buckshot ball used with a shotgun which I processed like a planet, and a broken zipper pull that I found buried near our trailer. The pictures I'm sharing from finds at home include plenty of fun prizes! Another view of the Winchester 300 casing, a Hamm's beer can advertising the exciting aluminum can, a bent fence-keeper wire, the largest piece of shrapnel I've found, care of Camp White, a spoon found in the dirt next to our road, a pair of dimes, four bottle caps found at a rest stop at Rogue River, and finally, a motorcycle chain rusted into position!

Pam, thank you for the lovely prize you mailed to me…it arrived yesterday and both Steve and I were very touched by your festive gesture. :) Here's hoping that Santa brings you something wonderful towards your recovery! *BIG HUGS on this COLD DAY* from Janet and Steve!

Great finds and a nice collection of bottle caps! But my FAV is "Twisted fence post wire keeper". A really great presentation!
19 months ago. | Permalink

beautiful series - and lots of treasures.
Your main pic is for sure a medieval Viking button - try detecting again, maybe you will find his sword too ;-)
19 months ago. | Permalink

Apart from the photos, (which, of course, I enjoy) I love your( kind of )diary and RHH's reply to yours. So much more than just photos. Thanks!
19 months ago. | Permalink

THE FUN IS IN THE HUNT !

LOVE AND HUGSSS JANET AND STEVE
19 months ago. | Permalink

Wonderful images and a very interesting information.
19 months ago. | Permalink

A wonderful selection of finds. Your photographs have done them proud. I too like the twisted fence post keeper. I love when a photograph shows something most of us wouldn't notice and makes it special.
19 months ago. | Permalink

Great series Janet, and thanks for the lovely story about Pumpkin.
Have a great Saturday all of you ;-)
19 months ago. | Permalink

Hi Janet. Love the main image...........and I just got side-tracked for around 30 minutes Googling stuff. My best guess is a craft stud of some sort (the type you've use to customise a leather or demin jacket maybe) or more likely the remains of a pair of men's cufflinks. I can't find an exact match but googling vintage cufflinks brings up a myriad of similar designs. Food for thought anyway!

I love your treasure trove in the insets...........all beautifully captured and presented but a few really caught my eye: Firstly the fence wire keeper - I love the colour and shape and the background is fantastic. Also the rusted motor cycle chain - for pretty much the same reasons! Finally, my favourite, the bottle tops - amazing shapes and earthy colours and fabulous detail. The texture you've used is really lovely!

I loved your "starting the day with Pumpkin" narrative............it really made me smile and I'm pleased that Steve solved the internet problems quickly so she could have her music :-))
19 months ago. | Permalink

You've made rich prey and fantastic shots!
19 months ago. | Permalink

Your metal series looks great, Janet. You present your treasures very well. The button at the main picture shines wonderful against the dark background. The found objects in the insets are interesting. Most I like the bottlecaps, the twistet wire keeper and the buckshot ball
19 months ago. | Permalink

Oh you really are enjoying your metal detector aren't you? You've found some lovely items, I do like the main image - especially with the stone in the middle. I should think you'll have a great time with it when you visit other places. Who's the man on the coins? I know it's Abraham Lincoln on the first ones. I've only really known our Queen on the front of our coins.

I also love your musings of your life with Pumpkin. She's 20 years old? Wow - how long do they normally live for? You have such a wonderful relationship with her.
19 months ago. Edited 19 months ago. | Permalink

so interesting
19 months ago. Translate | Permalink

One close-up is nicer than the other. All objects are perfectly presented!
19 months ago. | Permalink

a wonderful collection of rusty things
19 months ago. | Permalink

Very interesting things one can find in a State Park! I'm interested in the bicycle chain! ;-))
19 months ago. | Permalink

You are a real treasure hunter. The objects are beautifully photographed, even the garbage.
19 months ago. | Permalink

That's a lot of interesting "junk" you've found there!
17 months ago. | Permalink