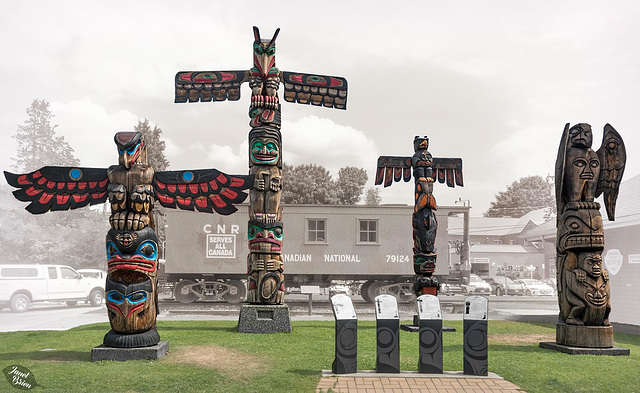 (+13 insets) (please scroll down for information about the insets!)

Trip Talk: Moving North to the Fabulous Hub Area of Nanaimo!
The second location of our Vancouver Island trip at Living Forest took us 50 miles (80km) north from our first site at Malahat Mountain. We'd been through Nanaimo during the motorcycle trip we'd been on some years before but only had an hour or two to visit. How excited we were to spend a whole week in the area! The Living Forest campground might not have been ideal but the location was fantastic and perfect for our upcoming adventures.

Duncan, the City of Totems!
The day after we arrived at Nanaimo, we headed off to Duncan, known for its seemingly countless totems erected in the heart of town. In fact, there is a walking tour, complete with green footsteps to show the way. I was a happy little kid with my camera as we made our way from totem to totem, stopping at each placard to read about each carved and painted statue.

The indigenous population is proud and thriving on Vancouver Island and wherever they can, local tribes call attention to their history and importance to the community. Duncan's totems are almost all located on the traditional lands of the Cowichan people (Quw'utson), the most populous group in British Columbia. The city began back in 1887, sharing space with the Cowichan tribes. Today both communities are so intertwined that all decisions are made together, taking care to respect everyone's wishes.

Each of the symbol-laden totems represent aspects of history, heritage and mythical legend; many are meant to represent a single house with its stories, passed down through the generations. Duncan began its collection of totems in 1985 and is one of the world's largest, currently at 44 as of 2018. It is meant to share this sacred tradition of the Cowichan people and is also a wonderful way to attract visitors.

Duncan's Shops Were Fun Too
As Steve and I wandered along the meandering trail of green footprints, we stopped here and there at various little shops, including "The Olive Station." Steve was initially excited because the name sounded like a tasting bar for olives--something that he adores. Instead, it was filled with an equally delightful bounty--countless kinds of flavor-infused olive oils and balsamic vinegars. (Be sure to click on the link above to see pictures of this cool store!) We spent nearly an hour there as we chatted with the owner and tasted the dizzying varieties. Although it was really hard to make final decisions, we left with two bottles of olive oil in White Truffle and Tuscan Herb and a Balsamic vinegar in Cara Cara Orange-Vanilla. These lovely gourmet treats are something we've savored for special salads and we only wish they were affordable so we could order them nonstop!

Not Just Totem Poles!
There were other wonderful artistic sights to discover too. Murals, bronzes, traditional-styled artwork and tattoo-like touches painted on walls were really fun to discover--even the graffiti was sometimes photo-worthy! Walking through a square, I noticed a striking Asian sculpture that immediately made me think of Confucius. What do you know? That's what it was, and this one had historical meaning, left on a tasteful plaque that I'm including:

Confucius Statue
This statue of Confucius was donated by the Wah Sing Chow Family. It is dedicated to the Chinese pioneers who, from the early 1890s, established a Chinatown in the heart of Duncan that stood here for nearly 70 years. The Chinese community continues to make a unique contribution to Duncan's heritage. Wah Sing Chow (b. 1898) arrived in Duncan in 1908. After graduating from high school he studied law and became a human rights activist. He advocated for Chinese immigrants to be treated equally and was a respected community leader until his death in 1962.

Cowichan Valley Museum
Although we don't generally visit museums, the charming building which housed the Cowichan Valley Museum basically sucked us inside, and what a treat it was! Nearly an hour we spent there, gob-smacked by the eyefuls everywhere we turned our heads. Historical items were placed on every available surface, adorning the walls and ceilings, the floors were covered with historical rugs, and there was even a room set up to show what an old store looked like so many years ago. And every single thing came with its own description of what it was. Truly mind-boggling, Steve and I would move a few steps and just stare, looking from one item to the next and appreciating everything. The sheer amount of time that went into the displays, the information provided, it just completely and utterly blew us away. When we finally left, we both agreed that this particular museum was one of the very best we've ever visited! (Please be sure to visit the link above to see some pictures of the museum so you get an idea of what we saw!)

Today's Pictures
I am posting a selection of totems that we saw, but have decided not to include the placard descriptions for every one because I think it's just too much. Instead, I've included text for the totems in the main image as insets placed on each totem. (If you are interested in knowing more about all of the totems, there is a complete listing on Duncan's Walking Tour of Totems )

In addition to the totem poles, I have included murals, graffiti and artwork we found around town.

Pam, I hope that you had a peaceful, joyful Christmas. You've been in my thoughts and I'm hoping for the best in the coming days for your procedure! *BIG HUGS from southern Oregon*

Suggested groups:
39 comments - The latest ones

THIS TOWN I AM DESPERATE TO SEE !

THE THUNDERBIRD IS WELL REPRESENTED IN THIS PART OF OK AS WELL.AND THE CHICKASAW NATION HAS A WONDERFUL HERITAGE SITE.
20 months ago. | Permalink

what a fabulous serie. Have a healthy and Lucky new year
20 months ago. | Permalink

Brilliant as ever great series, I do ike the colour mono main image too, its very striking
20 months ago. | Permalink

This is a great documentary in words and pictures, Janet!
Thank you for sharing and have a Happy New Year!
20 months ago. | Permalink

I really like the way you have highlighted the totem poles and left the background in neutral tones of beige. A fascinating place.
20 months ago. | Permalink

When wagons and totems match together.
20 months ago. | Permalink

What a marvelous colection of shots Janet, congrats, love all, this totems are marvelous, but most important how much symbolism they represent, all a culture that we unknow, thanks for share in this fantastic wave
20 months ago. | Permalink

Those graffiti walls are exceptional. So talented and so colourful. I just love totem poles. Of course we don't have anything like that over here, so to see yours here is fantastic. Thank you for explaining to us what each totem pole is representing, Duncan does sound a fabulous place to visit, and to have loads of cash, if you find the Olive Station!!!!
20 months ago. | Permalink

Beautiful capture...
Happy New Year to you and yours
20 months ago. | Permalink

Janet,
To this I shall return ... so much to take in ! Beautifully presented and history noted.
20 months ago. | Permalink