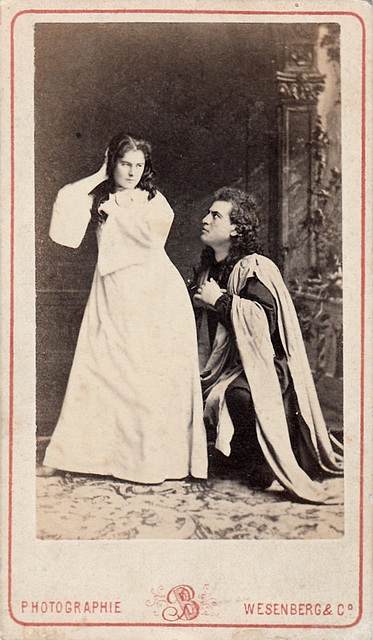 On the photo Wilhelmina Raab is seen as Tamara and Ivan Melnikov as The Demon in Rubinstein's opera "The Demon". Raab and Melnikov created these roles at the worldpremière in 1875 at the Mariinsky Theatre in St. Petersburg


Wilhelmina Raab, born Wilhelmina Bilik (1848-1917); Czech soprano.
She studied singing at the Conservatory of St. Petersburg with Henriette Nissen-Saloman, as well as at the Conservatory of Vienna with Falconi. In 1871 she made her debut at the Imperial Opera in St. Petersburg as Mathilde in Rossini's "William Tell". Here she remained until 1884. During this period she sang at various important world premières of Russian operas. In 1874 she created Natalya in Tchaikovsky's "Oprichnik", in 1875 Tamara in Rubinstein's "The Demon" and in1876 Oksana in "Vakula the smith" also by Tchaikovsky. In 1877 she sang at the Russian première of Rubinstein's "The Maccabees" the role of Noëmi. In 1880 she created the role of Alyona Dmitriyevna in Rubinstein's "The merchant Kalashnikov" and in 1881 Agnès Sorel in Tchaikovsky's "The maid of Orleans". She had a virtually unlimited creative power, what enabled her to perform multiple roles in the same Opera: Gorislava and Lyudmila in Glinka's "Ruslan and Ludmilla", Kupava and the title character in "Snegourotchka/The Snow Maiden" by Rimsky-Korsakov, Queen Marguerite and the page Urbain in Meyerbeer's "Les Huguenots" and Donna Anna and Donna Elvira in Mozart's "Don Giovanni". Among her most memorable roles were Marguerite in "Faust", Gilda in "Rigoletto", Elsa in Lohengrin and Aida. After she retired from the stage she worked at the Conservatory of St. Petersburg as a vocal teacher.

Ivan Melnikov (1831-1906); Russian baritone.
He studied singing at the Conservatory of St. Petersburg with Gavriil Lomakin and in Milan with Repetto. He started his career at the Opera of Kiev (1865/67). In 1867 he made his debut at the Imperial Opera in St. Petersburg as Riccardo in Bellini's "I Puritani". The first two years he only performed in Italian operas. Then he turned his interest to the independent Russian Opera, whose roles he sang from now on. Until 1890 he was a highly respected member of this leading Russian Opera house. He performed in St. Petersburg in a number of musically and historically important world premieres of Russian operas. In 1872 he created the role of Don Carlos in the premiere of Dargomyshski's "The stone guest" and in 1873 Prince Tokmakov in Rimsky-Korsakov's "The Maid of Pskov". In 1874 he sang the title role in the first complete performance of Mussorgsky 's "Boris Godunow". In 1875 he created the title role in Rubinstein's "The Demon" and in 1890 Igor in Borodin's "Prince Igor". He also created roles in four of Tchaikovsky's operas: Prince Vyazminsky in "Oprichnik" (1874), a devil from hell in "Vakula the Smith" (1876), Prince Kurlyatev in "The Enchantress" (1887) and Count Tomsky in "The Queen of Spades" (1890). In 1890 the highly respected artist ended his career with a performance of Prince Igor. During the years 1890/92 he was general director of the Mariinsky Theatre. In 1897 he undertook a last farewell tour. In 1906 he published his autobiography.
Suggested groups:
Comments