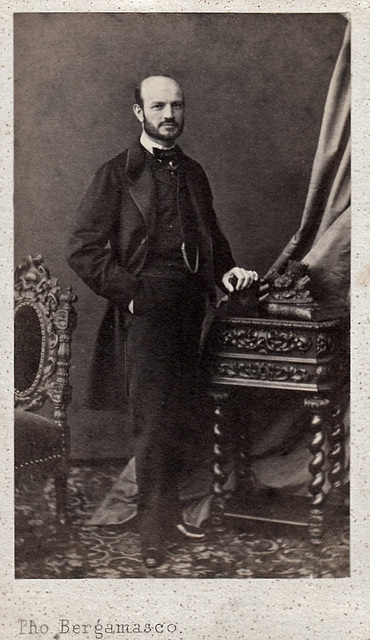 Enrico Calzolari (1823-1888); Italian tenor.
In 1846 he made his debut at La Scala in Milan as Lindoro in Rossini's "L'Italiana in Algeri". The next season he already made guest appearances at Vienna. He performed in Madrid (1847/48), Brussels (1848/49) and Paris (1850/52) at the Grand Opéra, where he also made a successful career. In 1856 he sang at Her Majesty's Theatre in London the role of Alfredo in the English première of Verdi's "La Traviata" with Marietta Piccolomini as Violetta. In the long period 1853/75 he appeared many times at the Court Opera of St. Petersburg; the audience of the Russian residence paid homage to the famous opera singer in an exuberant way. He did possess a lyric tenor voice and his most memorable roles were Elvino in "La Sonnambula", Tonio in "La fille du régiment", Nemorino in "L'Elisir d'amore", Almaviva in "Il barbiere di Siviglia", Don Ottavio in "Don Giovanni", Paolino in "Il matrimonio segreto", the title role in Rossini's "Otello" and Ramiro in "La Cenerentola".
Suggested groups:
Comments