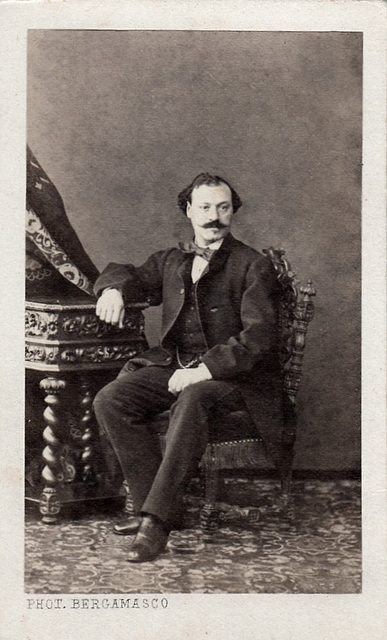 Francesco Graziani (1828-1901); Italian baritone who created the role of Don Carlo in Verdi's "La forza del destino" in St. Peterburg (1862). He was born into a musical family. Three of his brothers (tenor Lodovico 1820-1885, baritone Vincenzo 1836-1906 and bass Giuseppe 1819-1905) also became professional singers. His brother Lodovico was the first Alfredo in Verdi's La Traviata in1853. They all studied with Cellini and in 1851 Francesco made his debut in Ascoli Piceno as Conte di Vergy in Donizetti's "Gemma di Vergy". In the following years he performed in all the major opera houses in Italy including La Scala Milan. In 1854 he made a tour of guest appearances through the USA. In 1855 he made his Covent Garden debut in London as Don Carlo in Verdi's "Ernani". Until 1880 he returned to London almost every year and he performed in a number of English premières : in 1855 as Count di Luna in "Il Trovatore", in 1865 as Nelusco in "L'Africaine", in 1867 as Rodrigo in "Don Carlos" and in 1876 as Amonasro in "Aida". During the seasons 1853/61 he was also very successful in Paris at the Théâtre-Italien. In 1862 he created at St. Petersburg the role of Don Carlo in Verdi's "La forza del destino" with Enrico Tamberlick in the role of Don Alvaro. Graziani had one of the most beautiful baritone voices of his time, but from artistic point of view he appears not to have been very gifted. Critics of that time repeatedly referred to defects in his phrasing and they also doubted his musicality.
Translate into English
Suggested groups:
Comments