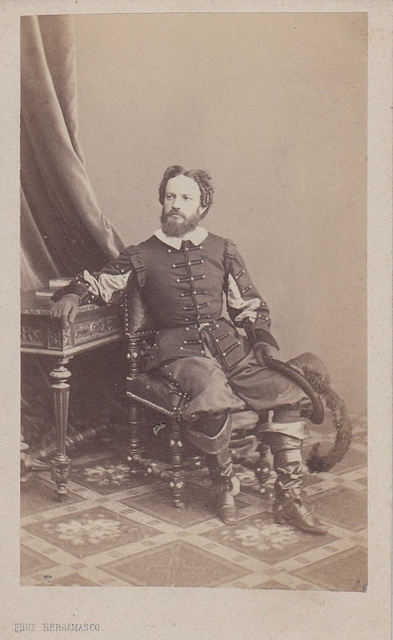 Fyodor Komissartschevsky (1832-1905); Russian tenor.
He studied law at the St. Petersburg University and then worked at the Russian Department of Taxation. After three years and against the wishes of his father, he gave up his career as a lawyer to study singing in Italy with Pietro Repetto. He then sang, under the name "Teodoro di Pietro", in Milan, Rome, Florence and Genoa, as well as in Odessa, Madrid, Barcelona, and even Rio de Janeiro. In 1863 he was engaged at the Mariinsky Theatre in St. Petersburg where he remained until 1880. Here he created Don Juan in Dargomyzhsky's "The Stone Guest" (1872), the Pretender in Mussorgsky's "Boris Godunov" (1874), Prince Sinodal in Rubinstein's "The Demon" (1875) and the title role in Tchaikovsky's "Vakula the Smith" (1876). In 1880 he moved to Moscow where he was engaged by the Bolshoi Theatre. Here he performed as a singer and as a stage director as well. In 1883 he retired from the stage and the following 5 years he was he was a professor of singing and acting at the Moscow Conservatory. In 1905 he died in Rome and was buried in the Protestant Cemetery.
The inscription on his gravestone reads: "Teodoro Komisarjevsky di Pietro, artist of the Italian opera and the Imperial Opera of St. Petersburg, professor at the Moscow Conservatory and a soldier in Garibaldi's legions, died on the soil of his beloved Italy."
Suggested groups:
Comments