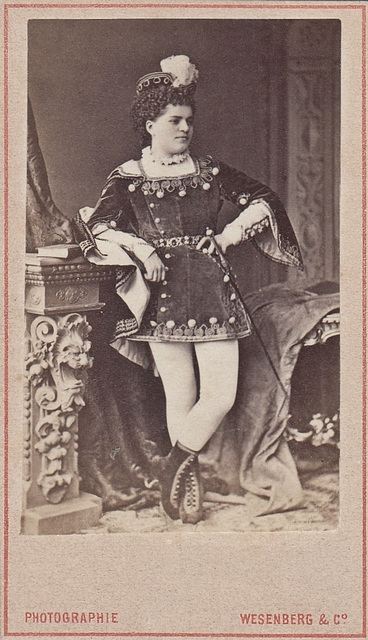 She received her vocal training from Augusta Boccabadati. In 1866 she made her debut in Mantua as Ulrica in Verdi's "Un ballo in maschera". In the following years she appeared in the Italian Opera theatres of Verona, Bologna, Faenza, Nizza and Brescia. In 1868 she made her London debut at Covent Garden as Azucena in Verdi's "Il Trovatore". In the following years -until 1890- she appeared at Covent Garden, performing roles like Urbain, Amneris and Arsace. In 1882/83 she toured the U.S.A. for the first time, singing with the Mapleson Company. In 1883 she sang at the inauguration of the newly constructed Metropolitan Opera New York the role of Siébel in Gounod's "Faust". In 1884 she returned to Mapleson's Opera Company. In 1891 she was again engaged at the Metropolitan. After leaving the Metropolitan in 1896 she formed her own opera company and undertook a final American tour. She sang at several important American premieres: Verdi's "Otello" and "Falstaff", Ponchielli's" La Gioconda" and Giordano's "Andrea Chénier". During her career she made guest appearances in Moscow, St. Petersburg, Vienna, Monte Carlo and North and South America. In 1896 she retired from the stage.
Suggested groups:
Comments