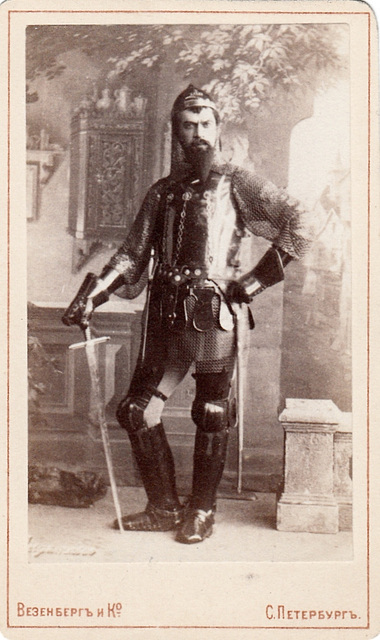 From 1869-1873 he received his vocal training at the St. Petersburg Conservatory followed by a study with the baritone Camille Everardi in Kiev. He started his solo singing career in Kiev (1873/76) before moving to St. Petersburg, where he sang at the Mariinsky Theatre for 26 years (1876-1902). He sang 64 roles in 1235 performances. He was hailed as the successor to Osip Petrov and was considered the leading bass at the Imperial Opera in those years. He created a number of roles in operas by Tchaikovsky: His Royal Highness in "Vakula the Smith" (1876), Dunois in "The Maid of Orleans" (1881) and Mamirov in The Enchantress(1887). He also created the role of Yugurt Sarrachini in Soloviev's "Cordelia" (1880), Tsar Ivan IV in Rubinstein's "The merchant Kalashnikov" (1880), Grandfather Frost in Rimsky-Korsakov's "The Snow Maiden" (1882), Mstivoy in Rimsky-Korsakov's "Mlada" (1892) and the title role in Nápravnik's "Dubrovsky" (1895). He died in 1902 and was buried in the Artist's Cemetery in the Alexander Nevsky Monastery in Saint Petersburg. He was the father of composer Igor Stravinsky (1882-1971) and the grandfather of pianist/composer Soulima Stravinsky (1910-1994).

On the photo he is seen in his creator role of Yugurt Sarrachini in Soloviev's "Cordelia".
Suggested groups:
Comments