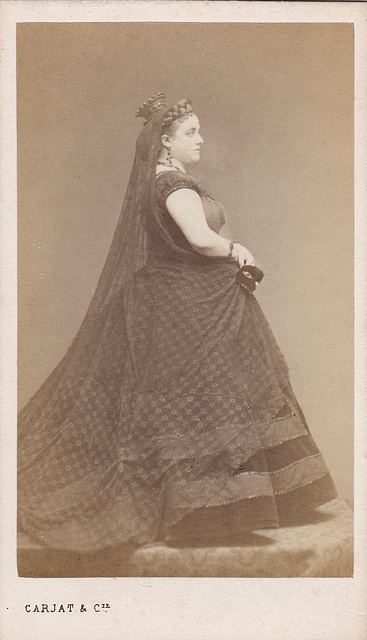 Marie Sasse (1834-1907); Belgian soprano.
In 1852 she made her debut in Venice as Gilda in Verdi’s “Rigoletto”. After an engagement at the Théâtre Lyrique she was engaged in 1860 by the Grand-Opéra Paris, where she was one of the leading sopranos for the next 17 years. Here she created the role of Elisabeth in the (Paris) premiere of Wagner's (revised) “Tannhäuser” (1861), the role of Sélika in the premiere of Meyerbeer's
“L'Africaine” (1865) and the role of Elisabeth de Valois in the premiere of Verdi's “Don Carlos” (1867). At the “La Scala” in Milan she created in 1870 the role of Cecilia in the opera “Il Guarany” by Gomes. She made guest appearances at St. Petersburg, Brussels, Cairo and Madrid. For a short period (1864/67) she was married to the famous bass singer Armand Castelmary (1834-1897). In 1877 she retired from the stage and worked as a singing teacher in Paris.She published her memoires in 1902 under the title “Souvenirs d’une artiste”. At the end of her life she lost her financial means and she died in poverty.

On the photo she is seen as Elisabeth de Valois in Verdi's “Don Carlos” ; the role she created at the world première on 11th March 1867 at the Paris Opera (Salle Le Peletier).
Suggested groups:
Comments