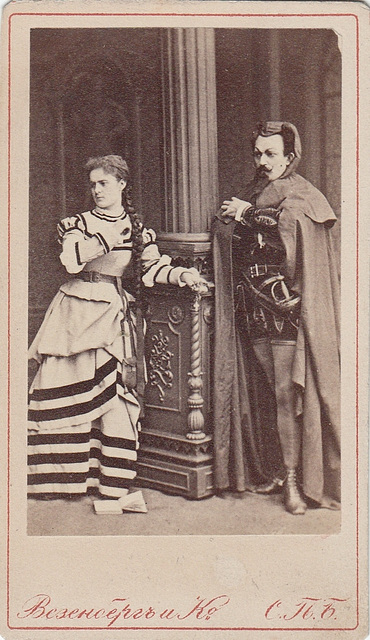 Josef Paleček (1840-1915); Czech bass.
In 1864 he made his debut at the Provisional National Theatre in Prague as Sarastro in Mozart's "Die Zauberflöte". Soon he performed important roles like Mephisto in "Faust", Falstaff in "Die lustigen Weibern von Windsor", Figaro in "Le nozze di Figaro" and the Cardinal in "La Juive". Here he sang at three world premières of operas by Smetana: as Kmet in "Die Brandenburger in Böhmen" (1866), as Kruschina in "Die verkaufte Braut" (1866) and as Benes in "Dalibor" (1868). In 1869 he joined the Italian Opera company in Moscow, but the following year he transferred to the Mariinsky Theatre in St. Petersburg. In 1874 he created the role of Rangoni in Mussorgksky's "Boris Gudonov" and in 1880 Sergey Kiribeyevich in Rubinstein's "The merchant Kalashnikov". At the Mariinsky he had a great career that lasted 40 years.

Wilhelmina Raab, born Wilhelmina Bilik (1848-1917); Czech soprano.
She studied singing at the Conservatory of St. Petersburg with Henriette Nissen-Saloman, as well as at the Conservatory of Vienna with Falconi. In 1871 she made her debut at the Imperial Opera in St. Petersburg as Mathilde in Rossini's "William Tell". Here she remained until 1884. During this period she sang at various important world premières of Russian operas. In 1874 she created Natalya in Tchaikovsky's "Oprichnik", in 1875 Tamara in Rubinstein's "The Demon" and in1876 Oksana in "Vakula the smith" also by Tchaikovsky. In 1877 she sang at the Russian première of Rubinstein's "The Maccabees" the role of Noëmi. In 1880 she created the role of Alyona Dmitriyevna in Rubinstein's "The merchant Kalashnikov" and in 1881 Agnès Sorel in Tchaikovsky's "The maid of Orleans". She had a virtually unlimited creative power, what enabled her to perform multiple roles in the same Opera: Gorislava and Lyudmila in Glinka's "Ruslan and Ludmilla", Kupava and the title character in "Snegourotchka/The Snow Maiden" by Rimsky-Korsakov, Queen Marguerite and the page Urbain in Meyerbeer's "Les Huguenots" and Donna Anna and Donna Elvira in Mozart's "Don Giovanni". Among her most memorable roles were Marguerite in "Faust", Gilda in "Rigoletto", Elsa in Lohengrin and Aida. After she retired from the stage she worked at the Conservatory of St. Petersburg as a vocal teacher.

On the photo Paleček is seen as Mephisto and Raab as Marguerite in Gounod's "Faust".
Suggested groups:
Comments