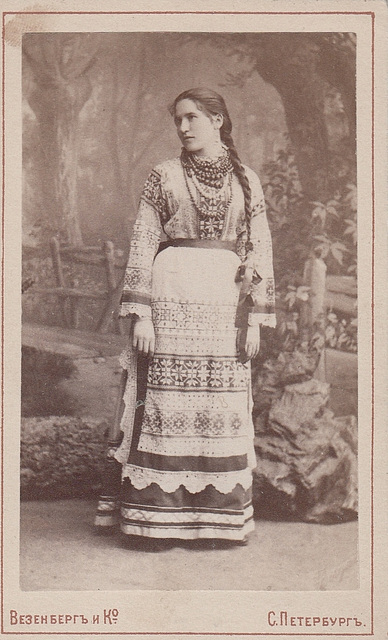 Maria Deysha-Sionitzkaya (1859-1932); Ukrainian soprano.
She studied singing at the Conservatory of St. Petersburg with Zwanziger and Everardi. She completed her vocal studies in Paris with Mathilde Marchesi de Castrone. In 1883 she made her debut as Aida at the Imperial Opera of St. Petersburg, where she would remain until 1891. From 1891 until 1908 she was engaged by the Bolshoj Theatre in Moscow. At the première in 1893 of Rachmaninoff's opera "Leko" she created here the role of Zemfira. In 1906 she began a distinguished concert career in Moscow. She had much influence on Russian musical life in those days. In the years 1907/13 she organized concert series in Moscow, where she presented vocal and instrumental music, including contemporary works. In 1907 she founded in Moscow the "Conservatory for the people", which she led until 1913. During the years 1921/32 she worked as a professor at the Conservatory of Moscow. She also staged operas at theaters in Yaroslavl and Moscow. She was generally considered one of the most important Russian singers of her artistic generation.
Suggested groups:
Comments