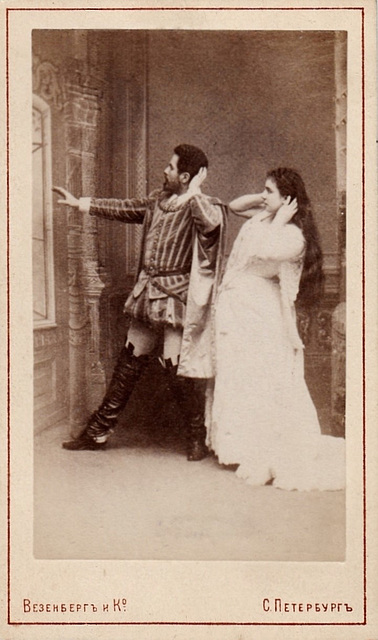 Nikolai Figner (1857-1918); Russian tenor.
He studied singing in St. Petersburg with Ippolit Pryanishnikov and Camillo Everardi and in Naples with De Roxas. Here in Naples in 1882 he made his debut at the Teatro Sannazaro in Gounod's opera "Philémon et Baucis". In the following years he sang at the opera houses of Parma and Bologna and made international guest appearances at London, Madrid, Bukarest and St. Petersburg.. At the opera of Parma he performed in Aida and La Gioconda together with his future wife Medea Mei (they got married in 1889). In 1887-1904 and in 1907 he was engaged at the Mariinsky Theatre in St. Petersburg. In 1887 he sang the title role in the Russian premiere of Verdi 's "Otello" and since 1889 he celebrated here many triumphs together with his wife. The singer couple had a large influence on Russian musical life of their epoch. The with them befriended composer Tchaikovsky completed on their country estate in the vicinity of Tula his opera "Pique Dame", which he dedicated to the two artists. In the premiere in St. Petersburg (1890) Nikolai Figner sang the the role of Hermann and Medea Mei-Figner the role of Liza. In 1892 they performed in another Tchaikovsky première; Mei-Figner created the title role of Iolanta and Figner the role of Count Vaudémont. In 1903 the singer couple divorced. In the years 1907/10 he sang at various private opera companies in Russia. During the period 1910/15 he was director of the Narodny Dom Theatre at St. Petersburg. In the turmoil of the Russian revolution of 1917 the once idolized artist completely impoverished.

Medea Mei-Figner, born Amedea Mei Zovaide (1859-1952); Italian soprano/contralto.
She was born in Florence and studied with Bianchi, Carozzi-Zucchi and Panofka. In 1874 she made her debut at Sinaluga as Azucena in Verdi's "Il Trovatore". During the following nine years she appeared in various Italian theatres. She made guest appearances in Madrid, Barcelona, London, Bukarest, Russia and South America. At that time her repertory included Amneris, Ulrica, Leonora (in La Favorita) and Carmen. Step by step she began to shift into the soprano repertory. She sang Valentine in Les Huguenots, Charlotte in Werther and Margherita in Mefistofele. During her appearances in Milan she met her future husband, the Russian tenor Nicolai Figner (1857-1918). She married him in 1889. They both joined the Imperial Opera in St. Petersburg, where they had very succesfull careers. The singer couple had a large influence on Russian musical life of their epoch. The with them befriended composer Tchaikovsky completed on their country estate in the vicinity of Tula his opera "Pique Dame/Queen of Spades", which he dedicated to the two artists. In the premiere in St. Petersburg (1890) Nikolai Figner sang the the role of Hermann and Medea Mei-Figner the role of Liza. They also created leading roles in the première of Tchaikovsky’s "Iolanta" (1892); Nicolai as Count Vaudémont and Medea as Iolanta. They sang at the première of 2 operas by the Czech composer and Mariinsky conductor Edouard Nápravnik: "Dubrovsky" in 1895 and "Francesca da Rimini" in 1902. She spent her life in Russia but remained an Italian trained singer. She appeared mostly in Italian and French operas. The couple was much loved by the Tsar’s family and they were guests at all the elegant drawing-rooms of Imperial Russia. In 1903 the singer couple divorced. In 1904 she made a last operatic tour in South America and continued her career at the Mariinsky Theatre in St. Petersburg until her farewell performance as Carmen in 1912. She finally left Russia in 1930 and settled in Paris where she died in 1952.

On the photo he is seen as Raoul and she as Valentine in Meyerbeer's "Les Huguenots".
Suggested groups:
Comments