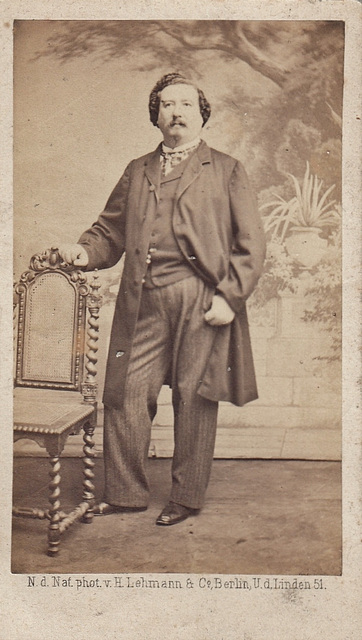 Emilio Pancani (1830-1898); Italian tenor who created the title role in Verdi's "Aroldo" in 1857.
He was a pupil of Borzacchi in Florence and began his career as a chorister. After singing comprimario roles in Italian provincial theatres, he had his first successes at the Odessa Opera House in 1851. When he returned to Italy he was engaged in Naples, Milan and Genua for more important roles. In 1857 he created the title role in Verdi's "Aroldo" at the Teatro Nuovo Comunale in Rimini. From 1858/60 he appeared at La Scala in Milan, where he returned during the seasons 1864/65 and 1868/70. In 1860/61 he made guest appearances in Paris as well as in Germany (Berlin, Hannover and Königsberg). His voice was a dramatic tenor; the title role in Rossini's "Otello" and Manrico in Verdi's "Il Trovatore" were considered his greatest creations.
Suggested groups:
Comments