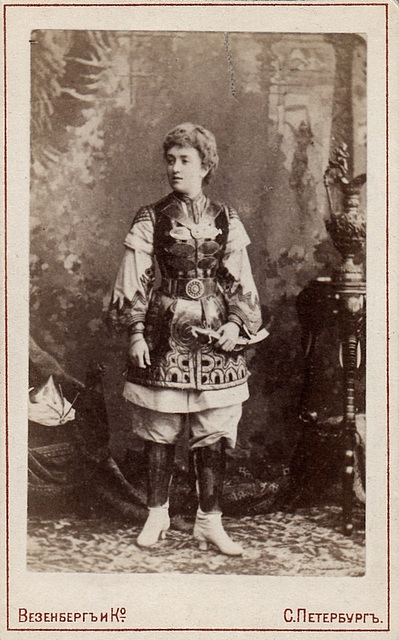 Maria Dolina, born Maria Ivanovna Sajuschkina Gorlenko (1868-1919); Russian contralto.
Her voice was discovered by Garcia-Wilde and trained mainly by Kondratiev. Final studies were carried out with Carelli in Naples, with Mastriani in Milan and finally in Paris. In 1886 she made her debut at the Marienskij Theatre in St. Petersburg as Vanya in Glinka's "A life for the Tsar" (Ivan Susanin). She was engaged immediately and remained at the Mariiinsky until 1904. Here in 1890 she sang at the premiere of Borodin's "Prince Igor" under the direction of Edouard Naprawnik. Also in 1890 she created the role of Polina at the premiere of Tchaikovsky's "Pique Dame/Queen of spades" and from the same composer in 1892 the role of Laura in "Iolanta". In 1896 she sang at the Mariinsky the role of Hansel in the Russian premiere of Humperdinck 's "Hansel and Gretel". She made guest appearances in Moscow and other Russian theaters and abroad in Paris, Berlin, Vienna, Budapest, Constantinopel, Sofia, Belgrad, Zagreb, Dresden and Rouen. Her repertoire consisted of more than 50 roles, mostly in the field of Russian and French Opera. As a concert singer she was very successfully in a vast repertoire.
Suggested groups:
Comments