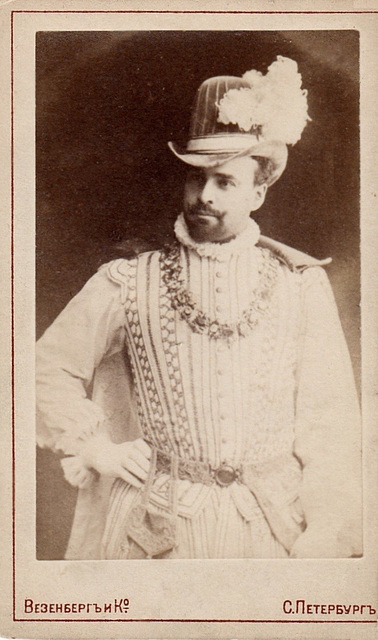 His voice was discovered by Riadnow in Kiev who gave him his vocal training. His first engagement was in Tiflis, where during the first two months he sang 8 different roles in 21 performances. Here he was heard by Tchaikovsky who recommended him to the director of the Mariinsky Theatre in St. Petersburg. Here he debuted in 1887 as Valentin in Gounod's "Faust" and very soon he became one of the most prominent singers of this company. His star role was the title character in Tchaikovsky's "Eugen Onegin", which he has sung 115 times in the course of his career. In 1890 he created the role of Prince Yeletsky in Tchaikovsky's "The Queen of Spades" and in 1892 the role of Robert in "Iolanta" by the same composer. He was immensely popular at the Mariinsky, both as a singer and an actor until vocal problems forced his retirement from the stage. In 1905 –after a severe cold- he lost his voice. Even after a one-year stay on the Riviera his voice did not return. In 1912 his friends tried -with little success- to help the very impoverished artist by organizing a celebration for his 25-year stage anniversary. In 1918 he was offered the position of a stage director at the Mariinsky, but he died a few months later.

On the photo he is seen as Le Comte de Nevers in Meyerbeer's "Les Huguenots".
Suggested groups:
Comments