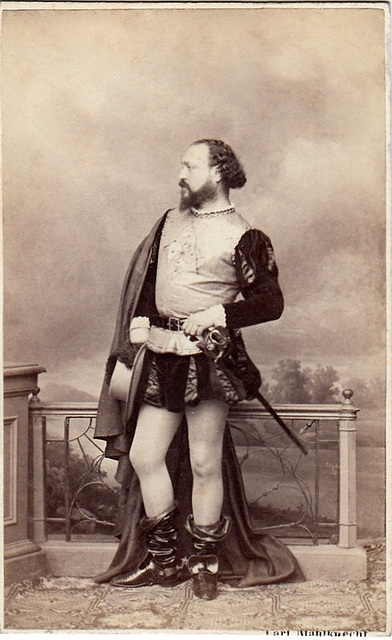 Lodovico Graziani (1820-1885); Italian tenor who created the role of Alfredo in Verdi's "La Traviata" at the Teatro La Fenice in Venice on 6 March1853. He was born into a musical family. Three of his brothers (baritone Francesco 1828-1901, baritone Vincenzo 1836-1906 and bass Giuseppe 1819-1905) also became professional singers. He studied with Cellini and made his debut in 1845 in Bologna in Cambiaggio's "Don Procopio". In 1846 he was heard at the Regio Teatro degli Avvalorati in Livorno as Elvino in Bellini's "La sonnambula". In 1847 he made his debut at La Scala Milan in the title role of Donizetti's "Dom Sébastien". In 1851 he sang in Paris at the Théâtre-Italien and in 1852 he was engaged in Venice at the Teatro La Fenice. Here he created the role of Alfredo at the première of Verdi's "La Traviata" in 1853. For the season 1854/55 he returned to Paris to sing again for the Théâtre-Italien. In 1855 Graziani returned to La Scala in Milan. He sang the role of Vasco da Gama in the first Italian performance of Meyerbeer's "L'Africaine" in Bologna in 1865.