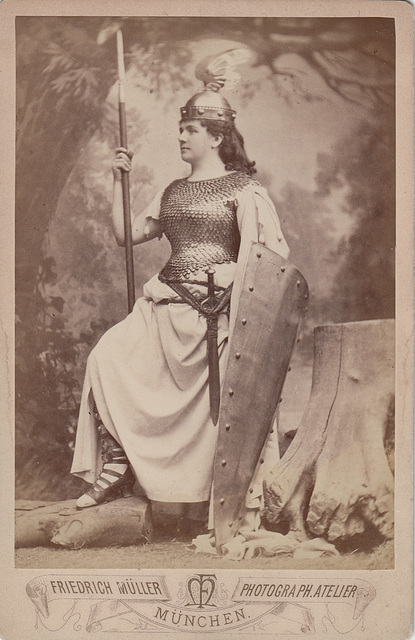 Therese Vogl, born Therese Thoma (1845-1921); German soprano who created the role of Wellgunde in Wagner's "Das Rheingold" (1869) and Sieglinde in Wagner's "Die Walküre" (1870).
She studied singing with Hauser at Munich and in 1865 she made her debut at the Karlsruhe Hoftheater as Casilda in Auber's "La part du diable". The next year she received an engagement at the Hofoper von München. In 1868 she married the famous "first tenor" of this opera house, Heinrich Vogl (1845-1900). On 26 June 1870 she performed the role of Sieglinde in Wagner's "Die Walküre" with her husband Heinrich Vogl performing the role of Siegmund. Both were considered outstanding Wagner singers and were regarded as the successors of the married couple Ludwig and Malvina Schnorr von Carolsfeld, who had sung the title roles at the world premiere of Wagner's "Tristan and Isolde" in 1865 in Munich. She was the first to perform the role of Brünhilde in England –at a performance of the Ring Cycle staged at London's Her Majesty's Theatre- with Anton Seidl conducting and her husband singing Loge and Siegfried. She made many guest appearances in Germany and Europe. In 1892 she retired from the stage as her voice had begun showing signs of deterioration. Her final performance was in Munich as Isolde. She was appointed an honorary member of the Munich Opera.

On the photo she is seen as Brünhilde in Wagner's "Die Walküre" (Munich 1870).
Suggested groups:
Comments