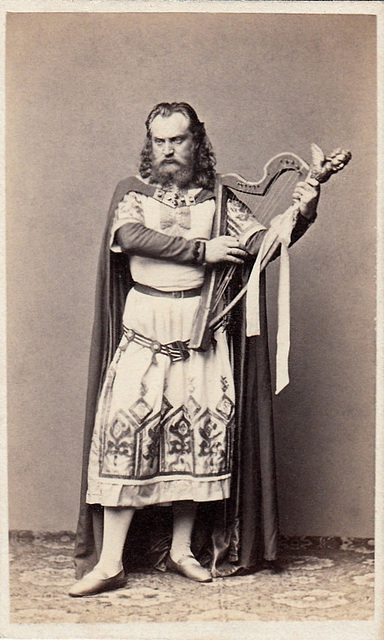 Albert Niemann (1831-1917); German tenor.
He made his debut in 1851 in Meyerbeer’s “Le Prophète" and continued his studies e.g. with the famous French tenor Gilbert Duprez. His first marriage –which lasted only two years- was with the soprano Marie Seebach (1830-1897). It is said they divorced after he threw her out of a first floor window. In 1871 he remarried, this time with the actress Hedwig Raabe (1844-1905) who kept the windows shut.
On 13-3-1861 he sang at the Grand Opera the for Paris revised version of Tannhäuser with Marie Sasse as Elisabeth and Fortunata Tedesco as Venus.
From 1866 till 1888 Niemann was a member of the “Hofoper Berlin”. In 1886 he sang in New York at the Metropolitan the rôle of Tristan in the American première of “Tristan und Isolde” with Lilli Lehmann as Isolde. In 1888 he sang at the same house the rôle of Siegfried in the American première of “Götterdämmerung” with Lilli Lehmann as Brünhilde.
The first complete production of “Der Ring des Nibelungen” was played at Bayreuth from 13 august to17 august 1876 and in the second opera “Die Walküre” Niemann performed the rôle of Siegmund.
His son Oscar Niemann (1862-1894) -from his first marriage- was a very promising tenor but died early.

On the photo he is seen as Tannhäuser in Wagner's eponymous opera.