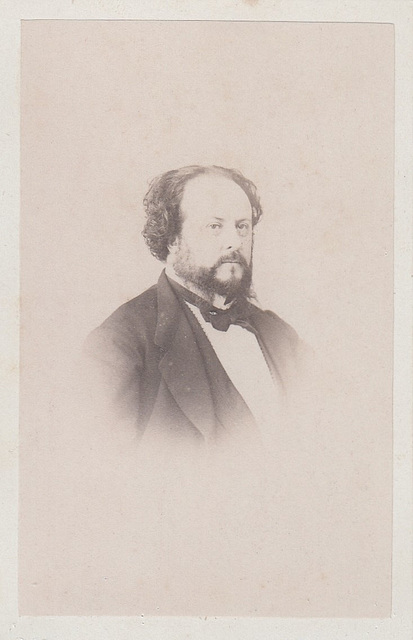 Gustave Roger (1815-1879); French tenor who sang in numerous premières. The most known are: Jean de Leyde in Meyerbeer's "Le prophète" (1849), Azaël in Auber's "L'enfant prodigue" (1850), Léon in Halevy's "Le juif errant" (1852) and Horace in Gounod's "La colombe" (1860). In 1838 he made his debut at the Opéra-Comique Paris as George in Halévy's "L'Éclair". During the following ten years, he was one of the most famous singers of the Opéra-Comique. In 1849 he was engaged by the Grand Opéra Paris where he made his debut as Jean de Leyde in Meyerbeer's "Le Prophète" with Pauline Viardot as Fidès. In the 1850s he undertook numerous guest appearances in Germany where he also sang in the German language. In 1851 and 1859 he appeared at the Berliner Hofoper, in 1851/52, 1854 and 1857 at the Stadttheater von Hamburg, in 1851 at the Hofoper von Dresden and in many other German cities. Due to a hunting accident in 1859 he lost his right arm. Until 1862 he remained at the Opéra-Comique and until 1868 he made guest appearances (Brussels, Prague etc). In 1868 he received his appointment as professor at the Conservatoire National in Paris. In 1880 his memories were published under the title "Le Carnet d'un Ténor".
Suggested groups:
Comments