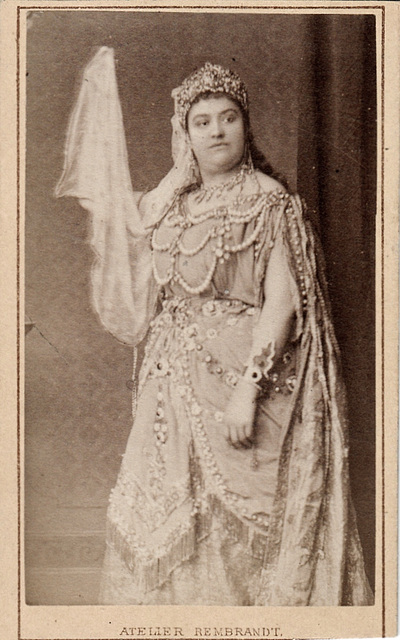 Amalie Materna (1844-1918); Austrian soprano.
In 1865 she made her operetta debut at the "Thalia Theater" in Graz. She made her opera debut at the Vienna State Opera in 1869, singing the role of Selika in Meyerbeer’s “L'Africaine”. She stayed a regular performer at this theatre for the next 25 years. She created the title role at the première of Goldmark’s “Die Königin von Saba” (1875). She sang the role of Brünnhilde (in “Walküre”, “Siegfried” and “Götterdämmerung”) in Wagner’s first complete production of “Der Ring des Nibelungen” that was performed at Bayreuth from 13 august to17 august 1876. Her performances as Brünnhilde in “Siegfried” and “Götterdämmerung” in this Ring cycle were worldpremières.In 1882 she created the role of Kundry in “Parsifal” at Bayreuth. After her retirement she taught singing in Vienna.

On the photo she is seen in the title role of Goldmark's "Die Königin von Saba" (Queen of Sheba), a role she created at the première on10 March 1875.
Suggested groups:
Comments