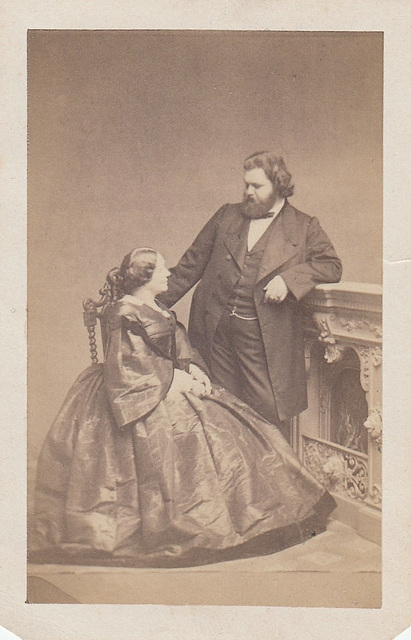 Ludwig Schnorr von Carolsfeld (1836-1865); German tenor who created the role of Tristan in Wagner’s “Tristan und Isolde” at the Munich Hofoper in 1865. He was the son of the famous painter Julius Schnorr von Carolsfeld (1794-1872). In 1854 he made his debut at Karlsruhe as Naphtali in Méhul’s “Joseph”, but his big success came with his performance of Robert le Diable in Meyerbeer’s eponymous opera. Next there were engagements in Wiesbaden, Frankfurt a.M. and Düsseldorf. In 1860 he was engaged as first tenor at the “Hofoper Dresden”, where he stayed until his death. He was chosen by Richard Wagner to sing the première of “Tristan und Isolde” on June 10, 1865. In July the opera was repeated 4 times. His last performance was on July 9. 1865 as Erik in “Der fliegende Holländer”. At July 21, 1865 he died just 29 years old. He was married to the soprano Malvina Garrigues (1825-1904), who created the role of Isolde in “Tristan und Isolde”.

Malvina Garrigues-Schnorr von Carolsfeld (1825-1904); Portuguese soprano who created the role of Isolde in Wagner’s “Tristan und Isolde” at the Munich Hofoper in 1865. She was the daughter of the Portuguese consul in Copenhagen and a pupil of the famous voice teacher Manuel Garcia Jr. in Paris. In 1847 she made her debut at Breslau as Isabella in Meyerbeer’s “Robert le Diable”. In the years 1849/54 she was engaged at the opera of Coburg und Gotha and Hamburg. From 1854/60 she was engaged at the Hofoper Karlsruhe and in 1860 she followed her husband Ludwig Schnorr von Carolsfeld to the “Hofoper Dresden”. She was chosen by Richard Wagner to sing the première of “Tristan und Isolde” on June 10, 1865 with her husband in the role of Tristan. After Ludwig's untimely death she gave up her career.
Suggested groups:
Comments