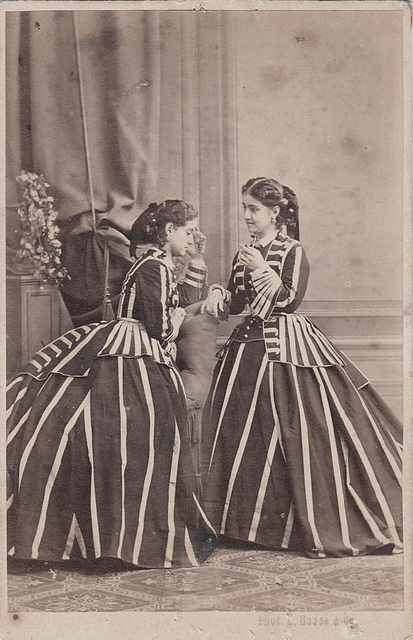 Adelina Patti (1843-1919); Italian soprano.
She came from a very musical family. Her father was the Italian tenor Salvatore Patti and her mother the soprano Catarina Chiesa Barilli. Her older sisters Amelia (1831-1915) and Carlotta (1835-1889) were also famous sopranos. Her brother Carlo (1842-1873) was a well known violinplayer and conductor.
As a child Adelina moved to New York where her father worked at the Italian Opera as a stage-manager. At the age of 16 she made her debut as Lucia di Lammermoor at the Academy of Music in New York. In 1861 she came to Europa (London) and in 1862 to Paris. That was the beginning of a long and very successful career and she sang in all the leading cities of Europa (Milano, Bruxelles, Monte Carlo, Vienna, Berlin, St. Petersburg and Moscow). She was the best paid singer of her time. Her last public performance was in 1914 at a charity-concert. She left about 32 gramophone recordings (from 1905 and 1906) of songs and arias.

The photo is a double portrait of Adelina Patti.
Suggested groups:
Comments