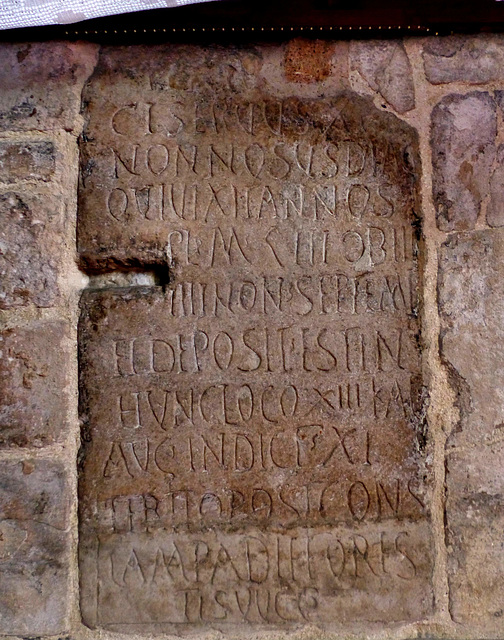 Archeologists excavated the foundations of the oldest known monastery in Carinthia around and below the parish church of Molzbichl. This monastery, founded 770/780 during the Christianisation of the area, existed for nearly two centuries.

The church of the convent was really large, measuring impressive 24m x 8m.

The graveslab of a deacon named Nonnosus is part of the altar.

Following the information it reads:

Here rests the servant of Christ, Nonnosus, deacon, who lived more or less for 103 years. He died on September 2 at this place died on July 20...three years after the consulate of the illustrious men Lampadius and Orestes. (= 533)

The plate may have been brought to Molzbichl from the nearby ancient city of Teurnia (today St. Peter in Holz), where Nonnosus could have served as a deacon. The area of Teurnia was under the jurisdiction of the bishops of Freising - and a grave of "Saint Nonnosus" can be found in the crypt of the Freising Cathedral.

Nonnosus´ cult was strong in Bavaria. He was prayed to by sufferers from diseases of the kidneys. At Freising, these sufferers performed a ritual, called "Durchschluepf". It involved crawling three times around Nonnosus' sarcophagus on all fours.