352/365: "There is only you and your camera. The limitations in your photography are in yourself, for what we see is what we are." ~ Ernst Haas 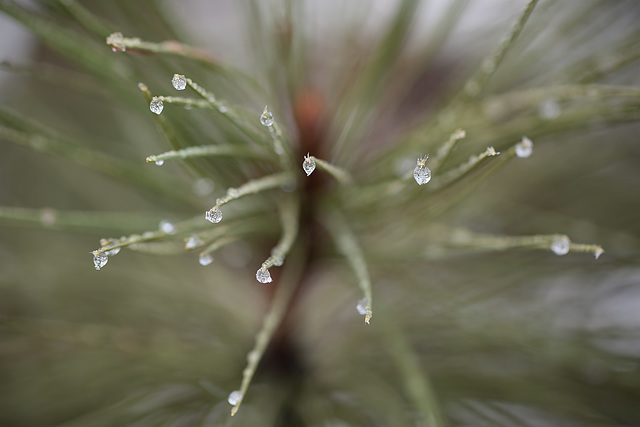 I've had my eye on the pine tree next to the house for weeks now. Every day I see frost on the needles and I am dazzled when I look closely. I've taken a few pictures but not too seriously because on each occasion, I already knew what picture I'd be using for my Picture of the Day, and I could tell that these pine needles would need "first billing" when the time was right.

With my crazy schedule as of late, I really have to shake my tail when it comes time for my daily photo session. If possible, having an idea of what I'll be photographing is very helpful for speeding up the process when I'm too busy to just drift around, so today I got my camera and went right to the pine tree. Oh my. So much to see, so many interesting angles! There was frost on the pine needles and frozen droplets too, and I managed to get quite an assortment of neat images. I don't have time to share more than two of them tonight, but this one is my favorite! The second picture is a perfect pairing, showing one of these frozen droplets close up and from the side, where you can even see the trapped air bubbles inside! SO COOL and amazing to me that it's possible to show such tiny, beautiful scenes in a full-sized image to share with all of you! :)

Ernst Haas (March 2, 1921 – September 12, 1986) was a photojournalist and a pioneering color photographer. During his 40-year career, the Austrian-born artist bridged the gap between photojournalism and the use of photography as a medium for expression and creativity. In addition to his prolific coverage of events around the globe after World War II, Haas was an early innovator in color photography. His images were widely disseminated by magazines like Life and Vogue and, in 1962, were the subject of the first single-artist exhibition of color photography at New York’s Museum of Modern Art. He served as president of the cooperative Magnum Photos, and his book The Creation (1971) was one of the most successful photography books ever, selling 350,000 copies. Wikipedia: Ernst Haas

Dave Hilditch
The single frozen droplet is amazing, Janet. It makes me want to invest in a macro lens! Both images are great.
I hope you and yours have a fabulous Christmas and a happy and healthy new year.
6 years ago. | Permalink

Phill G
How cool is THAT? They're like tiny Christmas decorations! Beautiful shot, Janet.
6 years ago. | Permalink

Chip Miller
Terrific you were able to get so many droplets of ice in focus on the same plane. Intriguing image, Janet.
6 years ago. | Permalink

raingirl club
I love the subtleties of the browns in the background keeping a balance with the detail of the frozen drops. Totally wonderful!
6 years ago. | Permalink

Barra1man
A terrific macro shot, Janet! Dandy detail and find.
May you and your family have a wonderful Christmas!

Seen and Appreciated in Ipernity Frontpage.
6 years ago. | Permalink

Jenny McIntyre club
This is one of the best macros I've ever seen. The size of the pine needles and these super little drops of rain is amazing. Oh well done Janet - it's wonderful
6 years ago. | Permalink

Xata club
Your beautiful pastel image was viewed and appreciated!