Japanese Barberry Increases the Risk of Lyme Disea… Family of Mushrooms...Say Cheese! :D 319/365: "Life's enchanted cup sparkles near the b… Broader View with Notes: Cannonball Fungus (MANY N… Seeing Stars: Cannonball Fungus After the "Cannonb… Amazing Find: Cannonball Fungus!!!! 320/365: "Happy is the person who knows what to re… Moth Mullein Covered with Raindrops The Sunday Challenge--Minimalism: Glowing Mushroom… 321/365: "There is no friendship, no love, like th… "A smile is the light in your window that tells ot… Tiny (4-5mm Tall) Mushrooms with Blue-Green Fungus… 322/365: "This joy of discovery is real, and it is… Droplets in Curled Rose Leaf Droplets on Yellowing Rose Leaf Against Sky 323/365: "The true lover of rain.... has a deep in… Mushroom with Bendy Stem! Another Gorgeous Sunset with Boiling Clouds 324/365: "Everyone can identify with a fragrant ga… Frosted Earthstar from Above A Frosted Rusty Nail in Frosted Old Wood Frosted Chocolate Mushrooms 325/365: "Nature hath framed strange fellows in he… Golden Oak Leaf Moosie and His Stick 317/365: "Never regret anything you have done with… Molly's Nose and a Great Big Smile "I Love You Mom!!!" 316/365: "The past is a ghost, the future a dream,… [STORYTIME]"For life and death are one, even as th… [STORYTIME!] 315/365: “When the first light comes… "This egg sac is my great work—the finest thing I… Stumpy White and Cream Mushroom 314/365: “When you go home, Tell them of us, and s… A Sunset Worth Appreciating Rose Hip Wabi-Sabi 313/365: “We owe our World War veterans - and all… Tattered Black Oak Leaf Caught on the Way Down Over My Head...Is This a Murder of Crows or a Cons… 312/365: "As a single withered tree, if set aflame… Molly is a Happy Girl! Sunset with Burn Smoke, Jet Trails, the Moon and V… 311/365: "I have always looked upon decay as being… Dripping Wet & Beautiful Decaying Oregon-grape Lea… Moosie Surveying His World 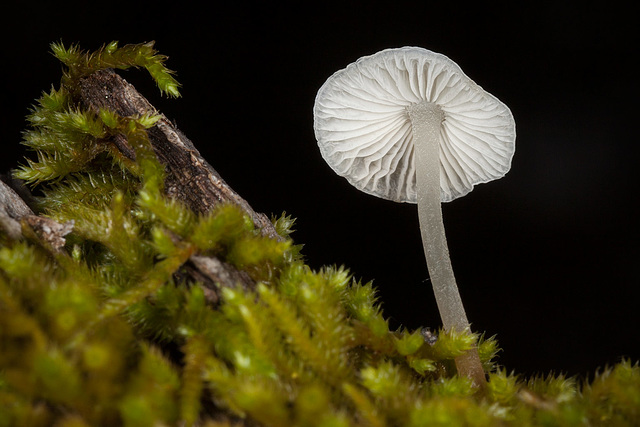 Another moist and cloudy day, I had a plan in mind when I left the house and headed to the lower forest. I'd found a new kind of moss "sporophyte" that I wanted to photograph and was looking forward to getting some pictures to share.

However, as you can see by the image above, things didn't go according to plan! :D I thought I'd take a look around my favorite mushroom spots on the way to the sporophytes, and well...let's just say that the forest floor is ERUPTING with mushrooms! There are so many of them I honestly had a hard time putting a foot down without smashing at least one! Most are extremely tiny, delicate beauties, others are large, and some are the size of "button" mushrooms we get from the store. I really did try to resist taking pictures! But when I saw this one, I gave up the struggle! :D Although this one is like the one I shared a couple of days ago, it's not the same kind. That one was covered with a glossy layer of slime, but this one was much smaller, about one centimeter in diameter, and dry all over.

I hope that you don't mind all of the mushroom pictures! I just love them and they are all so different and unique that I simply can't resist! :) Tomorrow I will attempt to get pictures of those sporophytes like I planned today! Wish me luck! :D

Gilbert Keith Chesterton (29 May 1874 – 14 June 1936) better known as G.K. Chesterton, was an English writer, lay theologian, poet, dramatist, journalist, orator, literary and art critic, biographer, and Christian apologist. Chesterton is often referred to as the "prince of paradox." Time magazine, in a review of a biography of Chesterton, observed of his writing style: "Whenever possible Chesterton made his points with popular sayings, proverbs, allegories—first carefully turning them inside out." Wikipedia: G. K. Chesterton

Kostas Papantoniou, Ramon Hierro, , and 22 other people have particularly liked this photo

I can see why you couldn't resist this one, Janet. This is lovely and looks great on black background.
Perhaps today, you'll cpature the shot you intended when you went out!
Have a great weekend.
8 years ago. | Permalink

Outstanding mushroom, great lighting and colors too!
8 years ago. | Permalink

this is a beauty! Love all the mushrooms pictures, so keep on :-)
8 years ago. | Permalink

wonderful this Janet!
8 years ago. | Permalink

just as being small like an ant. what an amazing world you show us, Janet!! so wonderful!! - have a nice weekend!
8 years ago. | Permalink

Wonderful shot! I love the composition.
8 years ago. | Permalink

An other very good shot
8 years ago. | Permalink