Tattered Black Oak Leaf Caught on the Way Down 313/365: “We owe our World War veterans - and all… Rose Hip Wabi-Sabi A Sunset Worth Appreciating 314/365: “When you go home, Tell them of us, and s… Stumpy White and Cream Mushroom "This egg sac is my great work—the finest thing I… [STORYTIME!] 315/365: “When the first light comes… [STORYTIME]"For life and death are one, even as th… 316/365: "The past is a ghost, the future a dream,… "I Love You Mom!!!" Molly's Nose and a Great Big Smile 317/365: "Never regret anything you have done with… Moosie and His Stick Golden Oak Leaf 318/365: "White is not a mere absence of color; it… Japanese Barberry Increases the Risk of Lyme Disea… Family of Mushrooms...Say Cheese! :D 319/365: "Life's enchanted cup sparkles near the b… Broader View with Notes: Cannonball Fungus (MANY N… Seeing Stars: Cannonball Fungus After the "Cannonb… Amazing Find: Cannonball Fungus!!!! 320/365: "Happy is the person who knows what to re… 312/365: "As a single withered tree, if set aflame… Molly is a Happy Girl! Sunset with Burn Smoke, Jet Trails, the Moon and V… 311/365: "I have always looked upon decay as being… Dripping Wet & Beautiful Decaying Oregon-grape Lea… Moosie Surveying His World 310/365: "You laugh at me because I'm different, I… Scale Shot of Me Holding the Bark with Mushrooms Three Amigos on a Nacho Leaf! :D Scale Shot of Me Holding the Decayed Leaf with the… 309/365: "Your success and happiness lies in you.… Sepia-Toned Short-Stemmed Roussela Mushrooms Young Striped Skunk! 308/365: "Time sometimes flies like a bird, someti… Pretty Short-Stemmed Russula Mushroom Pair of Budding Mushrooms...Gosh, What Does This L… 307/365: "The true method of knowledge is experime… 10-Week Projects: Trees--Single Tree (Vintage Oak… Textured Autumn Leaves 306/365: "Chance favors the prepared mind." ~ Loui… Diffused Light on Pumpkin Texture on Pinky-Peachy Pumpkin

Over My Head...Is This a Murder of Crows or a Conspiracy of Ravens? 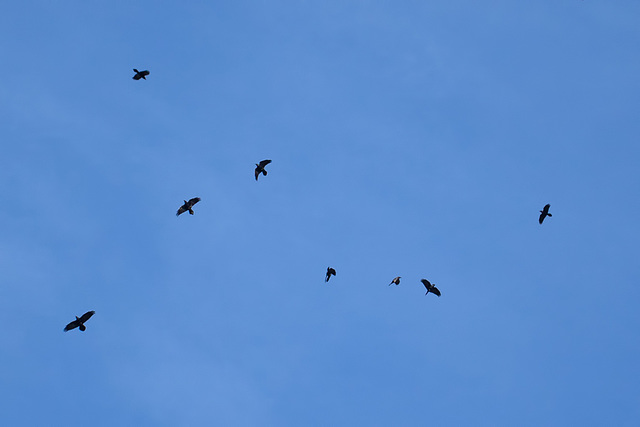 I saw this group of birds circling and cruising on the thermals as they slowly passed over the property. I heard them cawing and doing aerobatics, tumbling and doing somersaults and generally having a wonderful time!

After reading the information below and reading more on the web about the differences between these birds, I am not sure. The fan-shaped tails and the fact they are in a flock suggest they are crows, but crows have more of a flat wedge of their tail, so...this suggests these birds are ravens. Here's a picture to compare: Raven vs. crow tail feathers The aerobatics and low cawing sounds suggest they are ravens. They were quite large, which says raven; crows are a LOT smaller, and these guys were definitely big. If I'd been closer I'd be able to see their faces, which would tell me for sure. Judging on the extra information from Leapfrog (Art), I'm thinking they are ravens (my original feeling)....what do you think? Here's more info though, very interesting! :D

How to Tell a Raven From a Crow, a helpful guide from Audobon!
These black birds may look similar in some ways, but several distinctive traits help set them apart.

These two species, common ravens and American crows, overlap widely throughout North America, and they look quite similar. But with a bit of practice, you can tell them apart.

Ravens are larger, the size of a red-tailed hawk. Ravens often travel in pairs, while crows are seen in larger groups. (In flight, ravens will soar and do somersaults on thermal or wind-generated updrafts, but crows do not soar. So if that big black bird is soaring, it's a raven.) Also, watch the bird's tail as it flies overhead. The crow's tail feathers are basically the same length, so when the bird spreads its tail, it opens like a fan. Ravens, however, have longer middle feathers in their tails, so their tail appears wedge-shaped when open. (but not flat along the bottom like a crow)

Listen closely to the birds' calls. Crows give a cawing sound. But ravens produce a lower croaking sound.

H.-Marie, Chrissy, Don Sutherland and 2 other people have particularly liked this photo

Quite different! The ravens sound much the same in Australia. Anyway, This is a nice shot!
7 years ago. | Permalink

Well captured & a fascinating explanation of the way to tell the difference!

I once heard a similar description of how to tell the difference between Rooks & Crows: " If you see a Rook on its own - it's a Crow! If you see lots of Crows together - they're Rooks!"
7 years ago. | Permalink

I am NOT a bird nerd.. but they don't look like our ravens..
I am total opposite of Leapfrog, I though the tail did not look like a Raven.. so I am out, I have no clue.
7 years ago. | Permalink

Over here Crows rarely fly in groups but Rooks and Jackdaws do. We have so few Ravens here, in fact the only ones I have ever seen live in the Round Tower in Copenhagen.
5 years ago. | Permalink