"I Love You Mom!!!" Molly's Nose and a Great Big Smile 317/365: "Never regret anything you have done with… Moosie and His Stick Golden Oak Leaf 318/365: "White is not a mere absence of color; it… Japanese Barberry Increases the Risk of Lyme Disea… Family of Mushrooms...Say Cheese! :D 319/365: "Life's enchanted cup sparkles near the b… Broader View with Notes: Cannonball Fungus (MANY N… Seeing Stars: Cannonball Fungus After the "Cannonb… Amazing Find: Cannonball Fungus!!!! 320/365: "Happy is the person who knows what to re… Moth Mullein Covered with Raindrops The Sunday Challenge--Minimalism: Glowing Mushroom… 321/365: "There is no friendship, no love, like th… "A smile is the light in your window that tells ot… Tiny (4-5mm Tall) Mushrooms with Blue-Green Fungus… 322/365: "This joy of discovery is real, and it is… Droplets in Curled Rose Leaf Droplets on Yellowing Rose Leaf Against Sky 323/365: "The true lover of rain.... has a deep in… Mushroom with Bendy Stem! [STORYTIME]"For life and death are one, even as th… [STORYTIME!] 315/365: “When the first light comes… "This egg sac is my great work—the finest thing I… Stumpy White and Cream Mushroom 314/365: “When you go home, Tell them of us, and s… A Sunset Worth Appreciating Rose Hip Wabi-Sabi 313/365: “We owe our World War veterans - and all… Tattered Black Oak Leaf Caught on the Way Down Over My Head...Is This a Murder of Crows or a Cons… 312/365: "As a single withered tree, if set aflame… Molly is a Happy Girl! Sunset with Burn Smoke, Jet Trails, the Moon and V… 311/365: "I have always looked upon decay as being… Dripping Wet & Beautiful Decaying Oregon-grape Lea… Moosie Surveying His World 310/365: "You laugh at me because I'm different, I… Scale Shot of Me Holding the Bark with Mushrooms Three Amigos on a Nacho Leaf! :D Scale Shot of Me Holding the Decayed Leaf with the… 309/365: "Your success and happiness lies in you.… Sepia-Toned Short-Stemmed Roussela Mushrooms 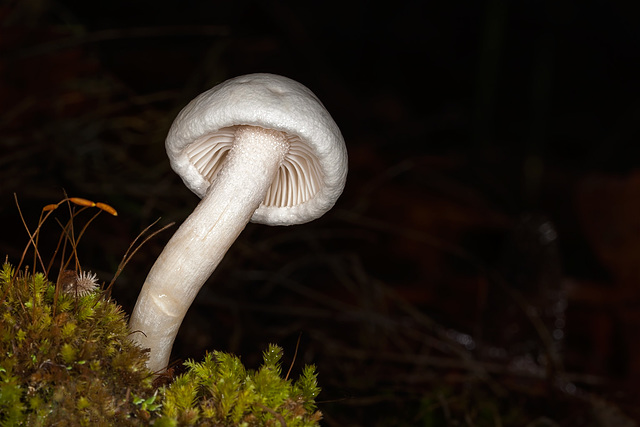 I woke up to the sound of rain pattering on the windows and drumming on the roof and I couldn't help but smile. We aren't having a very wet Fall this year, and with the decreased humidity and moisture, there haven't been many mushrooms so far. Of course I've found plenty, but that's only because I know where to look. Honestly, I should be tripping over them at this point. However, the rain during the night and this morning surely helped move things along, and I was excited to find out what had popped up!

As soon as the rain dwindled to a light drizzle, I bounced out of the house without any dogs to worry about, and you'd better believe I had my macro flash with me! :D I went to the lower forest where it's darker and full of moisture, and started looking around...it didn't take long before I found one...two...three...BUNCHES of mushrooms! Large ones like I've photographed recently, and extremely tiny ones, and then, I noticed something flash from under a leaf. Pulling the leaf aside, I found THIS glistening beauty, glowing white and radiant!

I was able to position the camera just right, and to my utter happiness, I was able to adjust the exposure of the flash so that this white mushroom wasn't blown out! For me, using a flash has been EXTREMELY FRUSTRATING in the past for light/bright objects because they are so easy to over-expose. But now I'm able to do exposure compensation with confidence and darn if it didn't work just right!! I had time to practice this morning and experimented with the flash, without the flash, and I also used the shutter speed mode (TV) just to test. If I want to make a picture that isn't low-key but still has this dof, I'd need to use a tripod, which I didn't have. In any event, when I got home and looked at my pictures, I was overjoyed by this one!! :D

William Henry "Bill" Cosby Jr. (born July 12, 1937) is an American comedian, actor, author, television producer, educator, musician and activist. A veteran stand-up performer, he got his start at the hungry i in San Francisco and various other clubs, then landed a starring role in the 1960s action show, I Spy. He later starred in his own sitcom, The Bill Cosby Show. He was one of the major performers on the children's television series The Electric Company during its first two seasons, and created the educational cartoon comedy series Fat Albert and the Cosby Kids, about a group of young friends growing up in the city. Cosby also acted in a number of films. Wikipedia: Bill Cosby

Petar Bojić, , , tiabunna and 24 other people have particularly liked this photo

That is one fantastic shot!
8 years ago. | Permalink

delightful capture, splendid on the dark background !
8 years ago. | Permalink

Great shot of this close up!
8 years ago. | Permalink

This is lovely. The contrast between dark background and light mushie its great.
8 years ago. | Permalink

Lovely macro of this beautiful little mushroom ( which I have no idea what it is). Us mushroom people call all these tiny, etzbitze mushrooms LBM's. Little Brown Mushrooms( although they do not have to be brown. Just having fun, love all you photos.
8 years ago. | Permalink

Very nice lighting. Although mushrooms are stationary, they are harder to photograph than they seem. I like the spider photo as well.
8 years ago. | Permalink

A lovely macro shot of this mushroom, Janet.
8 years ago. | Permalink