Emerging Poppy with Oil Paint Texture Poppy Family Frilly Skirt! 184/365: "Flowers always make people better, happi… Golden Blossoms Wild Strawberry Blossom 185/365: "The Universal view melts things into a b… Fireworks on the Fourth of July! Droplets with Poppy Refraction and Bokeh 186/365: "Nothing is softer or more flexible than… Bokeh Shot of an Irish Eyes Black-Eyed Susan The Green Eye of an Irish Eyes Black-Eyed Susan Irish Eyes Black-Eyed Susan Gazing at the Sky 187/365: "I learned that courage was not the absen… White Echinacea Green-Eyed Coneflower 188/365: "Happiness resides not in possessions, an… Heart of a Pink Poppy "Get it Off My Face!!!!"...Adorable Baby Swift Cra… Sparkling Pink Poppy Face 189/365: "The most important thing is to enjoy you… Three Ladies Wearing Pretty Pink Bonnets Textured Fitch's Spikeweed Kissed By The Sun Poppy Anthers Glowing in the Morning Light [STORY TIME!] 182/365: "The value of life can be m… 365 Project: June Collage With this Ring I Thee Wed 181/365: "...People will forget what you said, peo… Say Hello to Miss Poppy! Miss Poppy's Stylish Hairdo 180/365: "I believe in the photographer's magic —… Glowing Husk of a Tarweed Blossom Fading Glory, Still Beautiful 179/365: "Know the true value of time; snatch, sei… Poppy with Droplets Abstract Classic Ford Details 178/365: "If you wish to succeed in life, make per… Dreamy Goatsbeard Seed Head, Parachutes and Achene… Goatsbeard Achenes and Stalk with Parachutes Glowing Goatsbeard Parachutes (Pappus) Goatsbeard Seed Head and Achenes 177/365: "Your happiness is intertwined with your… Musically Inclined Treble Clef Tendril Gracefully Curled Tendril with Refracted Leaf

183/365: "Photography takes an instant out of time, altering life by holding it still." ~ Dorothea Lange 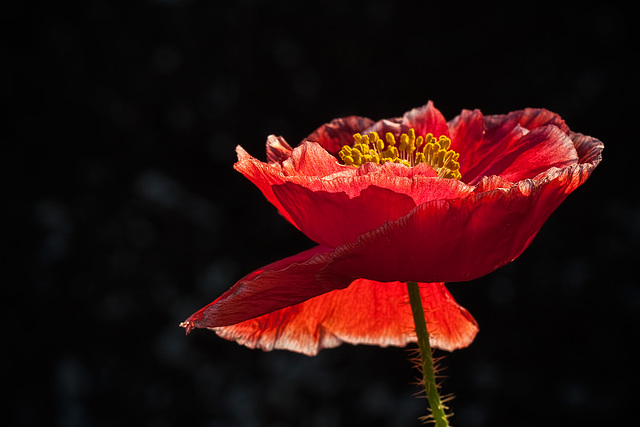 After examining the plants that sprouted from the seeds I planted a couple of months ago, and I am thrilled to announce that there are no less than a DOZEN poppy plants of various sizes! This morning I stepped out of the house and all I could see was this new, gorgeous poppy that had opened up overnight!! It is entirely different than the red poppy that bloomed a few days ago, and it has two layers of petals which are edged in cream! The color is also unique! It's not pink and it's not red, but a bit of both, and extremely beautiful! This picture was taken soon after the sun crested the hill behind our house, lighting up the colors and making the petals a brilliant hot pink-red! WOW!!

Today and tomorrow are very special because they mark the halfway point of my 365 project!! I'm overjoyed that I've made it this far and also that I'm still excited for each day's new Picture of the Day! It's been a challenge to keep myself from overdoing it and burning out, but I'm doing fine with my self-imposed restrictions. It was a smart plan, but I still find myself very annoyed when I want to keep taking pictures but I force myself to stop. It's necessary but still annoying! :D

this is really good!
8 years ago. | Permalink

This is beautiful, Janet - and so are the other 3, particularly your third shot.
8 years ago. | Permalink

this is so beautiful! ... and you got it perfectly against that dark background!! a pleasure to view!!
8 years ago. | Permalink

A glorious shot, Janet!! Fantastic light and colors on this poppy you captured here:)
8 years ago. | Permalink

Great light to capture the details of this gorgeous poppy, Janet.
Can't wait to see today's offerings.
Enjoy your day.
8 years ago. | Permalink

Wow ! Wow!
Fab and much more ! You can see I like it.
Seen in Beautiful Flowers
8 years ago. | Permalink

Thank you for adding this ! Jan
8 years ago. | Permalink

Beautifully photographed! I love the POV and the dark background! That unruly petal gives it a little extra character as well!
8 years ago. | Permalink

I simply love the dark background here! Really emphasises the beauty of the poppy.
8 years ago. | Permalink