Unidentified Eggies! Red & Black Wasp 203/365: "Happiness is a butterfly, which when pur… Portia Odessa Goldbottom Wrapping Up A Snack Say Hello to Portia Odessa Goldbottom!! White Moth Portrait 204/365: "Live as if you were to die tomorrow. Lea… Overhead View of Mini Aetole Micromoth Mini Aetole Micromoth with Hind Legs Sticking Up Female Acmon Blue Butterfly Next to Tiny Colorful… 205/365: "Butterflies are self-propelled flowers."… Bokeh Thursday: Coffee Foam Bokeh Thursday: Droplets on Drinking Bottle 206/365: "When you arise in the morning, think of… Sparkling Bachelor Buttons The Bee, the Blossom, and the Bokeh! 207/365: "Isn't it the sweetest mockery to mock ou… Pink Poppy Gorgeous in Grey, the California Hairstreak 208/365: "Intimidation doesn't last very long." ~… Tiny Little Clio Tiger Moth Caterpillars Love is in the Air: Mating Clio Tiger Moths 209/365: "The journey of a thousand miles begins w… Beautiful Cream & Lime Echinasia Blackberry Almond Scones with Almond Drizzle 201/365: "Have patience with all things, But, firs… White Poppy with Droplets Tiny Dainty Strawberry 200/365: "Beauty awakens the soul to act." ~ Dante… Tiny Bee on Strawberry Blossom Corvette Stingray Reflection 199/365: "I think in life, if you continue to chal… Bokeh Thursday: T is For Tarweed Bud Bokeh Thursday: T is For Teasel Blossoms Bokeh Thursday: T is For Tarweed Blossom Bokeh Thursday: T is For Bumblebee Tongue 198/365: "We are all of us stars, and we deserve t… Artistic Challenge: Psychedelic Beetle Gnat or Mosquito with a Droplet on its Proboscis 197/365: "Practice is the best of all instructors.… It's a Bird! It's a Plane! It's SUPERFLY! Hoverfly at Rest 196/365: "The pursuit of truth and beauty is a sph… Tiny Tree Tribble? No, It's a Small Wasp Gall! (6… Shield Bug Nymph (Juvenile) 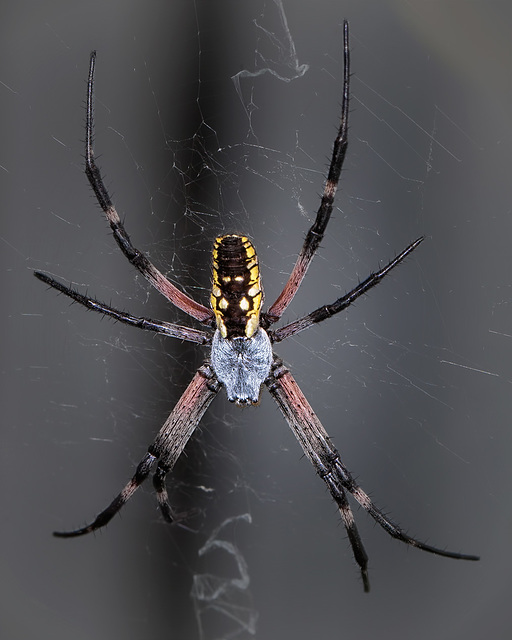 I went outside this morning to water my garden and as I trotted down the few stairs from our porch, I glanced at the walls to see if there were any critters to investigate. I was looking at the wall where our Rhodedendron bush grows and suddenly I saw a shape that grabbed my attention...could it be?!! NO WAY!!! *Janet bounces up and down in excitement* A GOLDEN ORBWEAVER SPIDER!!!! AT THE HOUSE!!! YES!!!!!!!

I am crazy about these spiders and yet I have had very little luck finding them on our property. I did find one two summers ago when I was using my point and shoot camera, but I have always wanted to take a picture with my new camera. Last year I looked and looked with no luck. This year, I've been searching but didn't find any either. But it appears that I have a new friend who's found ME!!! HOORAY!!! I'm hoping this spider will stay here for a while, and in case it does, I think it should have a NAME!! This is where YOU come in!!

SPIDER NAMING CONTEST!!! (She's a girl!)
Last September when I found my baby Cat-Faced Orbweaver spider on our porch, I had a naming contest! It was a lot of fun to choose Roscoe Frank McCrawlerson from everyone's names, and I thought I have another naming contest for this spider! (I found out that she is a female after asking at Bugguide.com!) If you have a nice name, put it in a comment, and after a few days I'll pick the winner! You can choose a name with one name or if you like, you can come up with a first, a middle, and a last name! However, it's possible that I might take just a part of that name for the winning name--let's find out! LET THE BEST NAME(S) WIN!!!

William Shakespeare (26 April 1564 (baptised) – 23 April 1616) was an English poet and playwright, widely regarded as the greatest writer in the English language and the world's pre-eminent dramatist. He is often called England's national poet and the "Bard of Avon". His extant works, including some collaborations, consist of about 38 plays, 154 sonnets, two long narrative poems, and a few other verses, the authorship of some of which is uncertain. His plays have been translated into every major living language and are performed more often than those of any other playwright. Wikipedia: William Shakespeare

Old Owl club
Great picture, Janet. (We get these in our garden. They can be very large! A couple of years ago I saw a photo of a golden orb weaver in Queensland eating a bird, a finch I think.) Most spiders we see are named Boris (after a song by The Who)!
7 years ago. | Permalink

spacemouses
Not of our spiders weave that zig-zag sort of web.
7 years ago. | Permalink

Hans Guenter club
What a beauty!
7 years ago. | Permalink

Levina de Ruijter
Whoa, what a great looking spider! And a beautiful macro. Congratulations, Janet!! Isn't it great when the animals we love come visit us?! :)
As for a name? My first thought was Daddy Long Legs, but that's probably not a very good choice as I believe there are insects that are called that. Hmmm...
7 years ago. | Permalink

Dave Hilditch
Great macro, Janet. The colours are lovely. But what it's called I've no idea. Boris perhaps??
7 years ago. | Permalink

sasithorn_s club
Wonderful macro. Janet! Such amazing colors and detail on this spider!
7 years ago. | Permalink

Ed Letts club
If I liked spiders I might be more excited about the great detail in this shot LOL
Very good!
7 years ago. | Permalink

Mags:-) off for a wh…
Darn, girl, you make any spider look stunning and this one...with the most awesome pink legs...fantastic...simply fantastic!!:D
7 years ago. | Permalink

Cats 99
What a beauty she is! I love her colouring and her sporty shape. She seems very athletic and I love the colouring on her legs! She reminds me of a very fast sports car so she should be called Porsche or Camero. (I don't favour Porsche because I have a hard time remembering how to spell it).
7 years ago. | Permalink

Dave Linscheid
They are amazing creatures. a great closeup view!
7 years ago. | Permalink

Loved the Scones... Adored the Flower....