Tiny Hoverfly in Blindweed Blossom "Chopper One, Coming in for Poppy Pollen!" 192/365: "Cunning... is but the low mimic of wisdo… 193/365: "The biggest emotion in creation is the b… Tiny Bee on Allium Queen Anne's Lace 194/365: "I always find beauty in things that are… Prionus Root Borer Beetle Portrait Side View of a Prionus Root Borer Beetle The Enormous Prionus Root Borer Beetle! 10 Week Picture Projects: TREES, Week 2--Green Lea… 195/365: "Wishing to be friends is quick work, but… Shield Bug Nymph (Juvenile) Tiny Tree Tribble? No, It's a Small Wasp Gall! (6… 196/365: "The pursuit of truth and beauty is a sph… Hoverfly at Rest It's a Bird! It's a Plane! It's SUPERFLY! 197/365: "Practice is the best of all instructors.… Gnat or Mosquito with a Droplet on its Proboscis Artistic Challenge: Psychedelic Beetle 198/365: "We are all of us stars, and we deserve t… Bokeh Thursday: T is For Bumblebee Tongue Bokeh Thursday: T is For Tarweed Blossom Echinacea Heaven (STORY TIME!!)...Along Came A Spider...Roscoe's Bo… Frilly White Blush Poppy 190/365: "Holding on to anger is like grasping a h… Textured Fitch's Spikeweed Three Ladies Wearing Pretty Pink Bonnets 189/365: "The most important thing is to enjoy you… Sparkling Pink Poppy Face "Get it Off My Face!!!!"...Adorable Baby Swift Cra… Heart of a Pink Poppy 188/365: "Happiness resides not in possessions, an… Green-Eyed Coneflower White Echinacea 187/365: "I learned that courage was not the absen… Irish Eyes Black-Eyed Susan Gazing at the Sky The Green Eye of an Irish Eyes Black-Eyed Susan Bokeh Shot of an Irish Eyes Black-Eyed Susan 186/365: "Nothing is softer or more flexible than… Droplets with Poppy Refraction and Bokeh Fireworks on the Fourth of July! 185/365: "The Universal view melts things into a b… Wild Strawberry Blossom

191/365: "Where light and shadow fall on your subject - that is the essence of expression and art through photography." ~ Scott Bourne 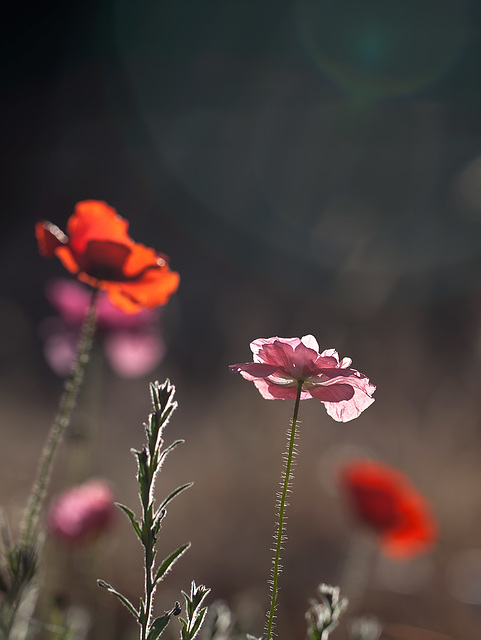 Steve and I decided a while ago that we need to start getting up earlier and we've slowly worked our clock back so that now I am getting up before 7am, and sometimes as early as 6am! How insane for a nightowl like me! But I've always loved the early morning when I'm up, so I'm getting a wonderful reward every time I get up.

This morning I stepped outside and found at least half a dozen poppies that were open or in the process of doing so. In shades of pinks and also red, I even noticed a little ruffled white one accented with a bit of pink blush that was shyly opening its face near the ground. I took many pictures and then gave all the flowers water as the sun peeked over the hill and began to shine rays of warmth upon all of our faces.

Once again I got my camera and took another set of pictures, and as I walked back and forth around the plot, I watched the way the sun made the petals glow and how the whole impact could change with just one step forward or back.

Crouching low, I looked at the poppies from under the petals, and the angle of the sun created magnificent lens flares which magnified the amazing scene I was witnessing. I got many pictures, and I'll show another favorite in a week or two!

Jenny McIntyre, , , Leiela (MCR) and 45 other people have particularly liked this photo

The backlighting and the flare are both lovely, showing the flower in a very different light. Literally as well as figuratively. A lovely image, Janet.
8 years ago. | Permalink

again.... a wonderful backlight. could stare at it the whole day.....
8 years ago. | Permalink

Great light and very impressive use of reduced DoF.
8 years ago. | Permalink

Marvellous use of rear lighting and DOF.
8 years ago. | Permalink

*Mags* made the point :))) fantastic series and I LOVE the spider shots!!!
8 years ago. | Permalink

The lighting here is fantastic, highlighting every single (hair?) on that poppy! I love it's beautiful pink colour too, perfectly captured in every detail! The bokeh is fantastic as well!

As for getting up early, I love to get up early! I'm not so much a night owl though; sometimes I stay up until around 11 pm but that is really late for me.
8 years ago. | Permalink

So cool and dreamy. I will have to skip the spider photo (eeek! shudder). Hope you understand.
8 years ago. | Permalink

A great use of back light, including the impressive flare!
8 years ago. | Permalink

Oh Janet - how absolutely gorgeous. The petals are like crepe paper and the light shining through them or highlighting them is just fantastic. You do have an incredible eye for beauty
5 years ago. | Permalink