White Echinacea Green-Eyed Coneflower 188/365: "Happiness resides not in possessions, an… Heart of a Pink Poppy "Get it Off My Face!!!!"...Adorable Baby Swift Cra… Sparkling Pink Poppy Face 189/365: "The most important thing is to enjoy you… Three Ladies Wearing Pretty Pink Bonnets Textured Fitch's Spikeweed 190/365: "Holding on to anger is like grasping a h… Frilly White Blush Poppy (STORY TIME!!)...Along Came A Spider...Roscoe's Bo… Echinacea Heaven 191/365: "Where light and shadow fall on your subj… Tiny Hoverfly in Blindweed Blossom "Chopper One, Coming in for Poppy Pollen!" 192/365: "Cunning... is but the low mimic of wisdo… 193/365: "The biggest emotion in creation is the b… Tiny Bee on Allium Queen Anne's Lace 194/365: "I always find beauty in things that are… Prionus Root Borer Beetle Portrait Side View of a Prionus Root Borer Beetle Irish Eyes Black-Eyed Susan Gazing at the Sky The Green Eye of an Irish Eyes Black-Eyed Susan Bokeh Shot of an Irish Eyes Black-Eyed Susan 186/365: "Nothing is softer or more flexible than… Droplets with Poppy Refraction and Bokeh Fireworks on the Fourth of July! 185/365: "The Universal view melts things into a b… Wild Strawberry Blossom Golden Blossoms 184/365: "Flowers always make people better, happi… Frilly Skirt! Poppy Family Emerging Poppy with Oil Paint Texture 183/365: "Photography takes an instant out of time… Kissed By The Sun Poppy Anthers Glowing in the Morning Light [STORY TIME!] 182/365: "The value of life can be m… 365 Project: June Collage With this Ring I Thee Wed 181/365: "...People will forget what you said, peo… Say Hello to Miss Poppy! Miss Poppy's Stylish Hairdo

187/365: "I learned that courage was not the absence of fear, but the triumph over it. The brave man is not he who does not feel afraid, but he who conquers that fear." ~ Nelson Mandela 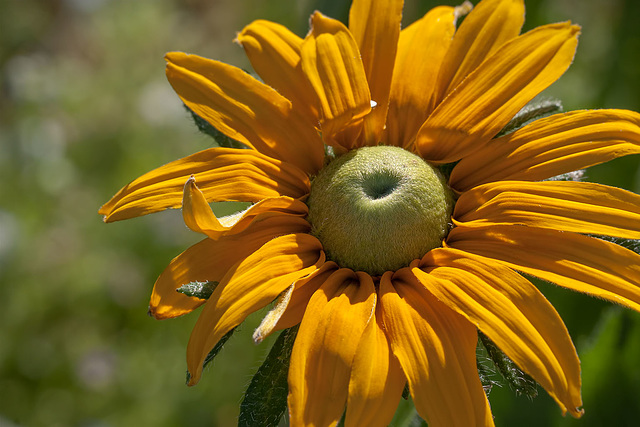 3 more pictures in notes above! :)

Well, I finally know what this flower's name is, it's called an Irish Eyes Black-Eyed Susan! My friend Robin, who gave this plant and three others to me a couple of months ago, let me know what this was called, and what a surprise! Who knew this flower came in different variants? I certainly didn't! I am especially delighted with this unusually colored flower because I am attracted to less common things--in this case, a Black-Eyed Susan with a green eye instead of black! COOL!!! :D

I wonder if these flowers are getting a snooty attitude with all the pictures I've been taking of them! Since they've formed as buds, I have been out there nearly every day taking countless pictures while they've matured into these truly magnificent blossoms. Today I had a great time taking pictures of the two flowers which are most mature, and I have three other pictures to share today. What a fabulous reward for my minimal care of providing water and protection from the deer. Such a special gift to me. Thank you Robin!!! I look forward to taking pictures of the flowers from the other three plants as well! :)

Nelson Rolihlahla Mandela (born 18 July 1918) is a South African anti-apartheid revolutionary and politician who served as President of South Africa from 1994 to 1999. He was the first black South African to hold the office, and the first elected in a fully representative, multiracial election. His government focused on dismantling the legacy of apartheid through tackling institutionalised racism, poverty and inequality, and fostering racial reconciliation. Politically an African nationalist and democratic socialist, he served as the President of the African National Congress (ANC) from 1991 to 1997. Internationally, Mandela was the Secretary General of the Non-Aligned Movement from 1998 to 1999. Wkipedia: Nelson Mandela

, , Rafael, and 16 other people have particularly liked this photo

All three flower shots are beautiful, Janet. This flower has some beautiful colours and you photographed them very well indeed.
8 years ago. | Permalink

A Masterpiece!
8 years ago. Translate | Permalink

Beautiful work Janet! Next to red, yellow is my favourite colour and you have captured it perfectly. I also love the Mandela quote...he is one of the few historical figures that I put on a pedestal and I pray that if he is not to recover that at least his last days can be peaceful and free of pain.
8 years ago. | Permalink

Great and beautiful capture, Janet.
I like to see this other pictures in the notes.
8 years ago. | Permalink

oh be still my wicked witch heart... this is so aWEsoMe... that colour just screams SUMMER!
8 years ago. | Permalink