Bokeh Shot of an Irish Eyes Black-Eyed Susan The Green Eye of an Irish Eyes Black-Eyed Susan Irish Eyes Black-Eyed Susan Gazing at the Sky 187/365: "I learned that courage was not the absen… White Echinacea Green-Eyed Coneflower 188/365: "Happiness resides not in possessions, an… Heart of a Pink Poppy "Get it Off My Face!!!!"...Adorable Baby Swift Cra… Sparkling Pink Poppy Face 189/365: "The most important thing is to enjoy you… Three Ladies Wearing Pretty Pink Bonnets Textured Fitch's Spikeweed 190/365: "Holding on to anger is like grasping a h… Frilly White Blush Poppy (STORY TIME!!)...Along Came A Spider...Roscoe's Bo… Echinacea Heaven 191/365: "Where light and shadow fall on your subj… Tiny Hoverfly in Blindweed Blossom "Chopper One, Coming in for Poppy Pollen!" 192/365: "Cunning... is but the low mimic of wisdo… 193/365: "The biggest emotion in creation is the b… Tiny Bee on Allium Droplets with Poppy Refraction and Bokeh Fireworks on the Fourth of July! 185/365: "The Universal view melts things into a b… Wild Strawberry Blossom Golden Blossoms 184/365: "Flowers always make people better, happi… Frilly Skirt! Poppy Family Emerging Poppy with Oil Paint Texture 183/365: "Photography takes an instant out of time… Kissed By The Sun Poppy Anthers Glowing in the Morning Light [STORY TIME!] 182/365: "The value of life can be m… 365 Project: June Collage With this Ring I Thee Wed 181/365: "...People will forget what you said, peo… Say Hello to Miss Poppy! Miss Poppy's Stylish Hairdo 180/365: "I believe in the photographer's magic —… Glowing Husk of a Tarweed Blossom Fading Glory, Still Beautiful 179/365: "Know the true value of time; snatch, sei… 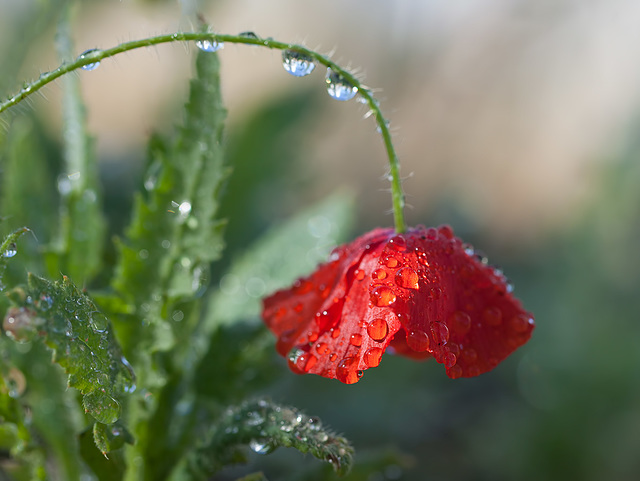 Steve and I live in sunny southern Oregon, and it gets very hot here during the summer. Therefore, if anyone wants a garden, daily watering is vital. Every morning I go out to visit the flowers and I usually take pictures before I water them because it seems a little bit like "cheating" to sprinkle the flowers before taking pictures but I also think it's fine as long as you tell people that you did it! :) (On the other hand, I think that removing things like sticks, dirt, postprossessing elements out of the image is fine and often necessary. What do you think? :) )

Our water is very "hard" and will leave spots on the petals when they dry, so if I hope to get pictures of the blossoms, I must take pictures before I water them, since it's next to impossible to keep water off the plants. (I really should see about putting in a drip system!!) Also, even though I have the setting at a light "shower", the flowers will often fall over. When I saw this flower, I first thought, "Awwww, darn it! And THEN I took a closer look and immediately dropped the hose and ran into the house for my camera! :D

Laozi or Lao Tzu; also romanized as Lao Tse, Lao Tu, Lao-Tsu, Laotze, Laosi, Laocius, and other variations) (fl. 6th century BCE) was a philosopher of ancient China, best known as the author of the Tao Te Ching (often simply referred to as Laozi). His association with the Tào Té Chīng has led him to be traditionally considered the founder of philosophical Taoism (pronounced as "Daoism"). He is also revered as a deity in most religious forms of Taoist philosophy, which often refers to Laozi as Taishang Laojun, or "One of the Three Pure Ones". Wikipedia: Lao Tzu

Heidiho, Crismo, , and 70 other people have particularly liked this photo

Wow, Janet. This one is stunningly beautiful. What a wonderful shot!!
8 years ago. | Permalink
Levina de Ruijter
has added
As to your question about removing distracting things in post, I try to avoid it as much as I can and I will try to get it right in camera, but you can't always do that and so yes, on occasion I too will remove something if I think it is distracting. But it is always a minor thing, like the tip of a twig in a corner somewhere. You know? I don't think there's anything wrong with that at all. :)
8 years ago. | Permalink

oh WOWWWWWW!! so beautiful!! like little diamonds are these droplets. This is awesome, Janet!!
8 years ago. | Permalink

I echo my other self...if you can hear me for that side. Love it now and again.
8 years ago. | Permalink

Wonderful shot, its head bowed with the weight of the droplets :)
8 years ago. | Permalink

This is totally and utterly sublime ! So SO exquisite

I love the upside down raindrop worlds too and have one on a pine needle.

Stunning shot my friend,perfect composition !!!
Have a great weekend.
8 years ago. Translate | Permalink

Janet this poppy is the one I prefer although the droplets are wonderful in the other one. I like the crisp clear look to this one. Well done.
8 years ago. | Permalink

Janet, I have the up most respect for those photographers that can create lovely images within the camera but I see nothing wrong with using the processing available to us with the various photo programs. I just don't have the patience to do the dials, numbers and such ... but I will spend a great deal of time 'creating' the mood or look I want with the various processing elements.
8 years ago. | Permalink

Puts my droplets to shame. This is a fantabulous image truly deserving of making Explore on both sites. I think you made the right decision to showcase this one.
8 years ago. | Permalink

I couldn't stop looking at this mesmerizing picture...fascinating, and one of my favorite quotes :-)
8 years ago. | Permalink

eek, thud...fainted from the beauty!
8 years ago. | Permalink

gorgeous image, love the strident red against the soft greens and the the crystal droplets
8 years ago. | Permalink

Very pretty - I think I prefer the main shot which you went with.
8 years ago. | Permalink