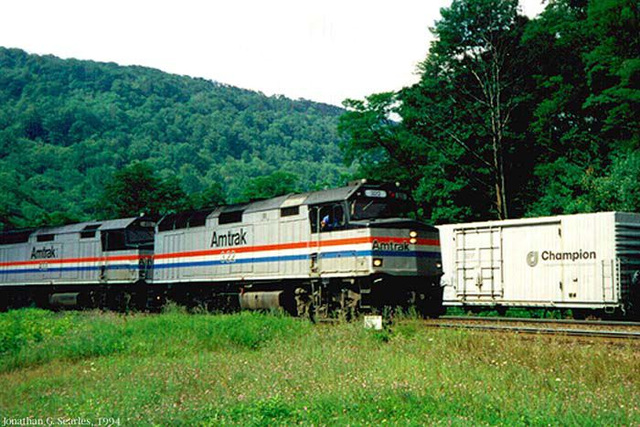 This was taken in 1994 on the former Pennsylvania Railroad mainline (then Conrail) on the famous Horseshoe Curve near Altoona. Amtrak still operated the Broadway Limited between New York and Chicago, and this was it, headed by two EMD F40PHs, both now retired. The Broadway Limited has, for now, been replaced by the Manhattan Limited in Amtrak's timetable, and now all the power for the Philadelphia-Chicago (or at least Harrisburg-Chicago) leg is provided by G.E. Genesis P42s. This has always been one of my favorite "train" shots, even if it isn't great by the standards of orthodox photography, with no abstraction, merely average colors, too-perfect light, and nothing of interest to the non-railfan.

Thank you to Joe-C for marking this photo a favorite!! :-)
11 years ago. | Permalink