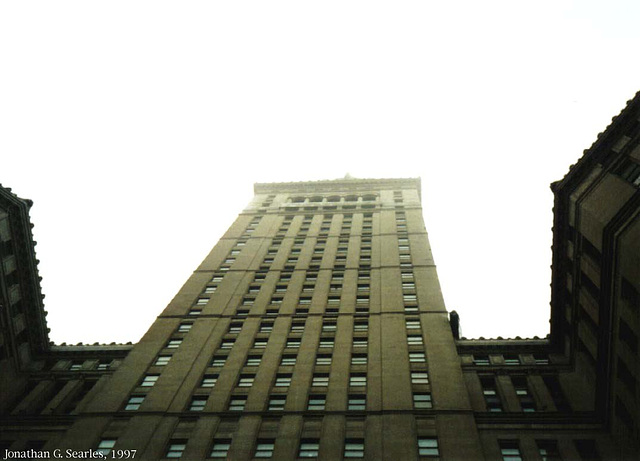 C.U.T. is so huge, at 216 meters (708 feet) in height (not to mention its unusually large footprint for even such a tall building), that when it was built it was the second tallest building in the world, and the tallest building outside of New York City until 1967. This would undoubtably also make it the tallest railroad station in the world, as I'm absolutely positive that no other station in the world could even come close. It's so tall that from the street it's impossible to see the top, especially on a foggy day like this one, and the sensation of looking straight up absolutely blows away the view of York Minster that I have elsewhere on this site. If you ever want to see the most amazingly, eye-wateringly spectacular railroad station in the United States, this one would definitely have a lot to recommend it over New York's Grand Central Terminal or Washington's Union Station. I've seen both of them, and although I would rank Washington Union very highly too, it's far more common in its design, even if it's still huge. GCT is surprisingly mundane in comparison with either Washington or C.U.T., and holds its ranking as "world's biggest railroad station" only because of its extensive system of underground tunnels. Aboveground, it doesn't even come remotely close to C.U.T. in any respect whatsoever, at least in my opinion. :-)
Suggested groups:
Comments