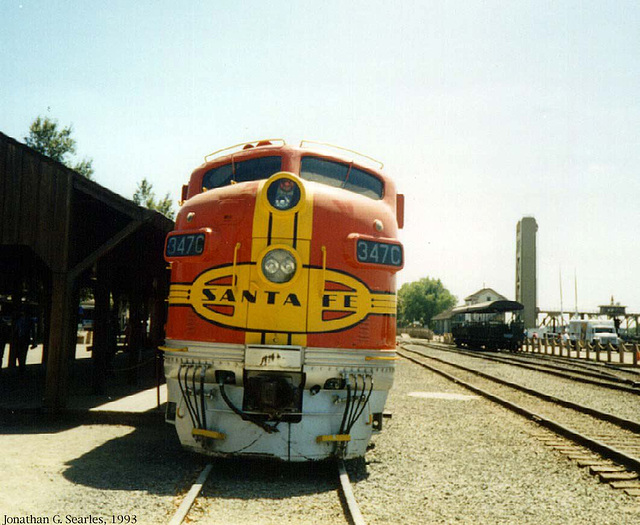 These diesels, to the uninitiated, were idolized in movies, on TV, and in countless model trainsets, and still are today. It might be the most-modelled diesel of all time. The only railroad that used the "Warbonnet" paint scheme was the Atchison, Topeka, & Santa Fe (ATSF) Railroad (now Burlington Northern Santa Fe, or BNSF), introducing the scheme on their E1A passenger diesels in 1937. The F-Unit series of freight diesels, like the E1As, were built by EMD from 1939-1960, and the Santa Fe were the first buyers in 1941, continuing to be regular customers for them until the mid-1950s. #347C is the ultimate classic variant of F-Unit, the F7A Phase I, and in this case is equipped for passenger service with 102 m.p.h. gearing and a steam generator (or at least it would have had these things originally). I don't remember the date #347C was built, but it certainly would have been around 1949, as that was when the F7A was introduced, and that's when the Phase Is were, of course, being built.

Thank you to Joe-C for marking this photo a favorite!! :-)
11 years ago. | Permalink