Latest posted Navigate on the map Photos with specific people Most appreciated Most viewed Most commented Search by keywords Search by date taken
See also... Jon Searles'
favorite photos All the photos where
Jon Searles appears

Originally, I had planned on using my first Blender project for Trainz as an assignment at Prague College. To my surprise, it was too long when presented live, and of questionable relevance to many students (who were my audience) who (surprisingly) were unfamiliar with some of the concepts such as UV mapping. My professor recommended that I do a presentation UV mapping instead, which while broader, can be explained in less time. Therefore, this is a video version of that live presentation, using most of the same content. Some of the content used in this presentation is from Wikimedia, some of the slides were developed in Microsoft Powerpoint, and the other applications used are available here: www.blender.org www.gimp.org www.sketchup.com unity3d.com

Although I have enjoyed Microsoft Flight Simulator for years, not all of my enjoyment has been from flying the planes. I have also made numerous repaints, and added literally thousands of new AI traffic routes. I've also modified all of the built-in ones, although not always with precision. This video summarizes how to build AI Traffic files using TTools and Notepad. TTools can be acquired here: flyawaysimulation.com/downloads/files/1231/traffic-tools-v202

I made this playthrough on the same day, and in the same studio, as the Street Rod 1 playthrough. As such, it has some of the same bugs. As with Street Rod 1, Street Rod 2 was previously a California Dreams product, but is now being developed by Marco Kleijer: streetrodonline.com

This is one of my favorite games of the 8-bit era, so this was actually my first-ever playthrough video (although not the first one that I uploaded). You can hear some voices in the background because the recording studio I used had a thin door. It was actually a post-production studio rather than a proper recording studio. I was also using a borrowed digital audio recorder, which I wasn't familiar with. There are also other bugs like the image not being centered. At the time, I was still learning how to use Open Broadcaster. obsproject.com Although it was originally developed by California Dreams, actually a Polish company, the rights are now owned by Marco Kleijer, who subsequently developed Street Rod SE, based on the car disks produced for Street Rod 1, and who is currently developing Street Rod Online. His website is here: streetrodonline.com

Railsim is one of the oldest train simulators I own, and it looks even older. However, it is still one of my favorites. In this playthrough, I try out the fictional Redwood-Blacktown commuter route (in the USA/CAN version of the simulator) with a freight train headed by 4 SD40-2 diesels. Railsim can still be downloaded from: www.dmg-berlin.info/page/lok/lok.php Jens Schubert has since developed a sequel known as ZUSI available here: www.zusi.de/zusi-3-hobby.html

This is an excerpt of the video I took on the last day of the NRHS Convention, during the Father's Day excursion on the Green Mountain Railroad. This is a brutal cut from the original, as I needed it to be under 10 minutes, and under 30MB, so it's less than a fifth of the original cut, with the original MOD files being much longer. 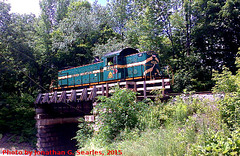 Here's Green Mountain #405. This actually wasn't my first time riding behind this unit, as I had also ridden the entire length of the Green Mountain Railroad behind it in 1990. 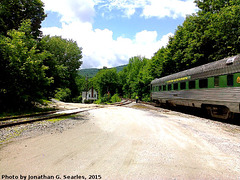 This was on the final day of the 2015 NRHS Convention, which happened to fall on Father's Day. As a result, a special Father's Day excursion was run on the Green Mountain Railroad to Ludlow, Vermont from Rutland. The only motive power was Green Mountain #405, an Alco RS-1, which was behind me when I shot this. The coaching stock was the same that had been used for the previous excursions that I had been on.

This was the excursion to Hoosic Junction mentioned in my earlier photo from North Bennington. My camera battery started to die when we got to North Bennington, so footage beyond that point is not included. To reiterate, this excursion included Vermont Railway #301, an EMD GP40, and #311, a GP40-2LW, for motive power, and Green Mountain Railroad coaching stock. You can see Amtrak's Ethan Allen Express at the beginning. 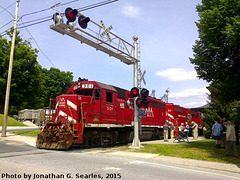 This was at North Bennington on the second to last day of the 2015 NRHS National Convention, the first such convention when I didn't have a working conventional camera. This was not deliberate, as I had brough the Pentax MZ-10 out of retirement, only to see it die on the 19th of June, which was the third to last day of the Convention. I still had the cameraphone, which I shot this with, but I mostly compensated by shooting video, something I had never done at an NRHS Convention before. This was at the North Bennington end of an excursion operated by Vermont Railway diesels, both of them GP40's, which are now so old as to be almost heritage units. The lead unit is #301, which looks roughly like any other GP40, but the trailing unit is a GP40-2LW, which has a safety cab and other modifications for service on the Canadian National. www.railpictures.net/viewphoto.php?id=465198 Another spotting feature that it has is a lowered center radiator fan, making it look a bit like a GP35, which had me confused at first. In general, EMD diesels sold in Canada had a number of special features, both from the factory and through later rebuilds, including some of the earlier safety cabs. Today, these features are less noticeable, as during the 1990's most of the Canadian features were adopted by American railroads. In addition, many Canadian variants have ended up in service in the U.S., as here. The passenger stock was the same mix as that used for the Omya excursion on the previous day, being a mix of heavyweight and streamline stock, but all of it being owned (operated?) by the Green Mountain Railroad. As one final aside, this excursion was technically to Hoosic Junction, but North Bennington was the last station on the route, and it was here that this photo runby was done. My video camera battery also died at about this point.

This was about where I discovered that the Pentax MZ-10 wouldn't be working for the convention, so this video starts as we arrive in Florence, Vermont, where Omya have a Limestone quarry and slurry plant. This excursion was operated by Vermont Railway EMD GP40 #301, and GP40-2LW #311, using Green Mountain Railroad passenger stock. 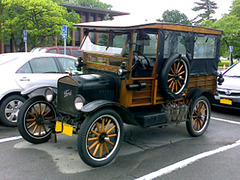 During my 2015 visit to Central New York, I saw this Ford Model T woodie wagon numerous times, but I have very little idea of its history. This website seems to be about it: www.modeltcentral.com/1920s-ford-model-t-depot-hack.html However, I can't be sure, as the Model T on that website lacks a lot of this one's distinct custom features, like the cowbells hanging from the suspension. The spare tire also doesn't match the photo on the website. It occurs to me that they may have been part of the same fleet of taxis serving the Poughkeepsie railroad station. This was, in fact, the original purpose of all station wagons, hence the name. They became popular family transportation much later. The Henry Ford Museum in Dearborn, Michigan maintains a small fleet of these woodies so that visitors can ride in Ford's most famous and revolutionary product (the Mustang, after all, did not originate personal motoring). 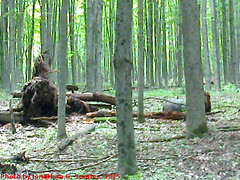 This is way back in the woods in the Root Glen. It isn't clear what it is, but the seat seems to indicate a piece of farming equipment of some kind. I'm fairly sure it isn't a tractor, but beyond that, any further information would be interesting. 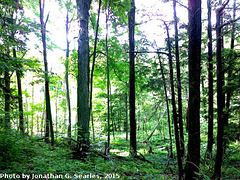 The Root Glen, on the grounds of Hamilton College in Clinton, NY, is named not for having a lot of roots (although it does due to the trees), but for Oren Root, a professor of Mathematics at Hamilton College who was the father of Elihu Root, who is usually the person more associated with the Glen. Elihu Root, was a Senator for New York (1909-1915), United States Secretary of War (1899-1904), and United States Secretary of State (1905-1909). Eventually he also studied at Hamilton College, as did his son, also named Elihu Root. According to this website: www.hamilton.edu/arboretum/root-glen/root-glen-history ...the Glen is officially named after the Root family, who maintained it until 1971, when it was fully transferred to Hamilton College 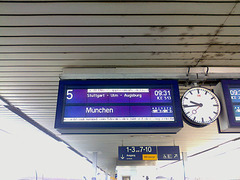 This sign is actually only the platform destination board showing what train is at the platform, so this wasn't taken in Munich at all. Instead, this was Mannheim, where I got my bus to Prague. This put my arrival time at 1618, hours behind the scheduled time of 0927. Controversially, however, CNL457 has since been withdrawn, as DB have decided to replace all their sleepers with ICE high speed trains. However, a number of sleeper trains operated by foreign companies will remain. 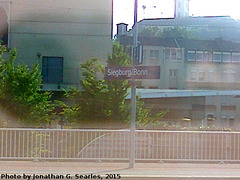 This was the sixth stop on the route, and the last before Frankfurt. Bonn is more interesting in historic terms generally, rather than having much to do with railways. During the Cold War, Bonn was the capital of West Germany.
3364 items in total
Jump to top