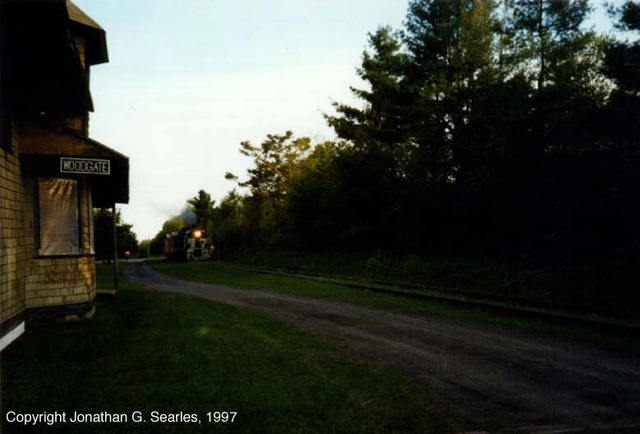 The modern Adirondack Scenic Railroad originated with the Adirondack Centennial Railroad, a project of the Utica & Mohawk Valley Chapter of the NRHS, in 1992, and was transferred to the Adirondack Railway Preservation Society in 1994, becoming the Adirondack Scenic. I was involved in the project as early as 1990, circulating fliers advocating the preservation of the line, and was very surprised to see our small, relatively informal preservation effort balloon first to the idea that we could restore the line ourselves, and then further to the reality of running a tourist railroad, then to hauling 62,526 passengers in the first year with 4.5 miles of track, four coaches, and two locomotives, to hauling 76,803 passengers in the second year, making us the most successful tourist railroad in New York State and ranking us very high nationally. The Adirondack Scenic is still around today, although I'm no longer involved with it, but when I took this I still was. This was former New York Central #8223 with a special Utica-Thendara move at Woodgate, as the sun was going down. Note that the copyright date on this photo is wrong. That's because my records were wrong when I posted it.
Suggested groups:
Comments