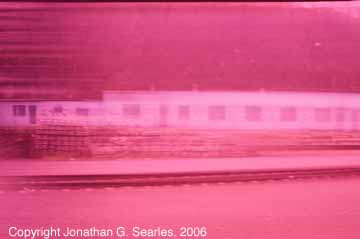 The yards and grounds surrounding Praha Hlavni Nadrazi are called "Sherwood Forest" by locals, referring to the near total anarchy there. The police are everywhere, but that doesn't reduce the public urination and defecation, the rampant vandalism, assault, robbery, and other much more awful crimes committed there, not to mention the unwillingness of any of the vagrants there to be even moderately sanitary. The whole station is slated for a rebuilding, which is already in its beginning stages, although there is still so much vandalism that I'm not sure what the point is. Anything built will be immediately trashed before it's even completed. There are also a lot of abandoned outbuildings in the yard, like this one. I shot this from a train waiting to depart.
Suggested groups:
Comments