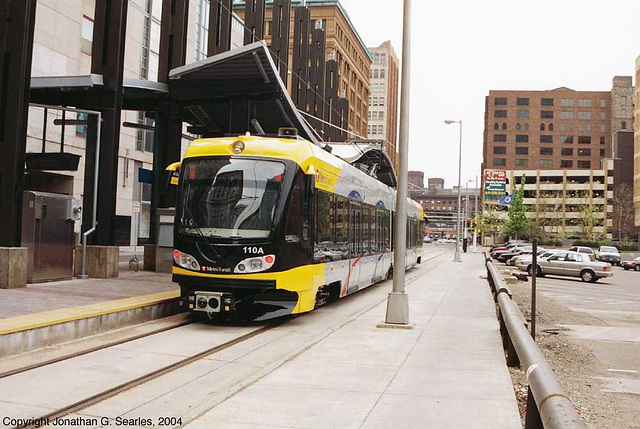 When I visited, Minneapolis was just putting the finishing touches on a controversial light rail project, called the "Hiawatha Line" after the famous steam-era express trains, and I was lucky enough to see them testing one of the new trams. These aren't particularly unconventional as modern trams go, except for that they have train horns and bells instead of traditional tram bells, making them extremely noisy. This may have had something to do with Metro Transit classifying them as "trains" rather than trams or trollies, even though they operate in the street and perform in every concievable way like most other modern trams. I haven't found out whether this has elicited complaints, improved safety, or both, but I do know that most of the controversy was unrelated to noise. Rather, the main argument against the project was that it didn't go anywhere locals wanted to go, instead providing a link only from Nicollet Mall (seen here) to the Mall of America. The line has since been extended further north to the Warehouse District, however, which would be to the rear of this photo (if I'm wrong on either of these points please correct me). In spite of the initial arguments against the project, however, this year Metro Transit reported their highest ridership on all modes in 22 years, with 73.8 million riders for 2006, blowing past their target of 71 million. The Hiawatha line only accounted for 9.4 million of these, but if you consider that initially it was predicted no one would ride, this could actually be called quite a success.
Suggested groups:
Comments