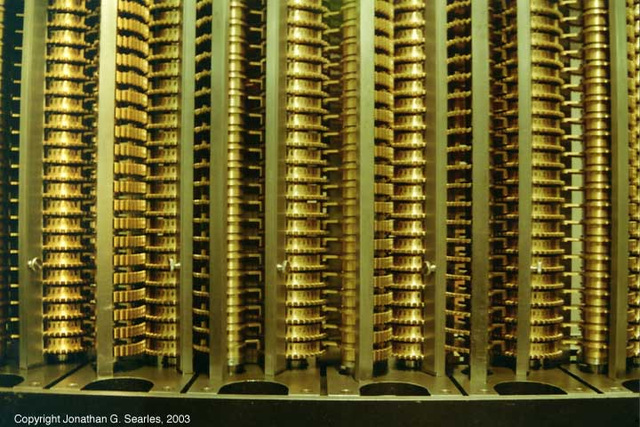 Charles Babbage is ultimately responsible for Flickr, at least if you trace it back far enough. He didn't invent photography or the internet, but many historians of technology consider him to have invented the computer, at least in theory. He built several calculation devices, most notably this one, the Difference Engine, to be used in conjunction with one another to form the "Analytical Engine," considered by many historians to be the first computer in the modern sense, albeit entirely mechanical in nature. Among other innovations, it was not only the first modern computer, but the first one to use punch cards to store software, a storage technology that was only phased out in the 1980s. This version of the Difference Engine (he designed and built several variants) was the largest, and it is not believed to have ever been assembled until the Science Museum in London assembled some old parts and drawings, built everything missing with period tools, and finished the job, putting the finished product on display as seen here. Upon testing it, they found that it worked perfectly, and supposedly it's still operable. Several other, earlier difference engines are displayed nearby, although all of the machines date to the 1830s.
Suggested groups:
Comments

This pic would also be good in Industrial In Details.
14 years ago. | Permalink