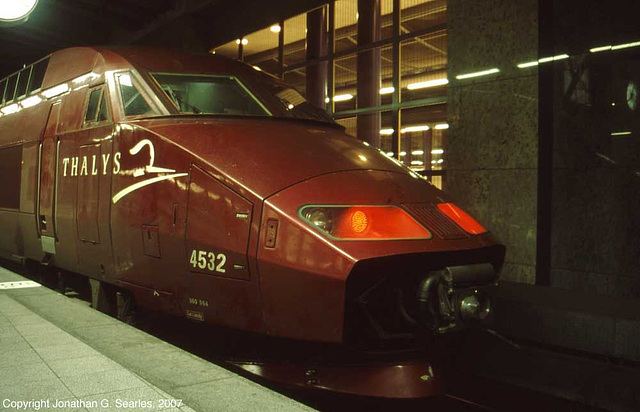 Jumping way ahead to my trip back to Prague, this was when I had to spend a few hours waiting for my connection in Brussels. I also took photos of the city, of course, but first...the trains!! :-) At least, this was the most interesting one, I thought. This is a Thalys TGV high-speed train, essentially a 2nd Generation SNCF TGV, but with multi-current capability for operating into Belgium, the Netherlands, and Germany. As with other international European trains, the Thalys is operated by a crew from the country it is currently in, switching at the border. These are used a lot by American tourists, at least if they've still heard of train travel, because they offer a faster form of international transport than the plane or the car. Also, if you have a Eurail pass (I didn't), it's often cheaper than flying, although a surcharge is added because the Thalys is, indeed, a true high speed train capable of running at 300Km/h (186 m.p.h.). This one looks to have its coupler exposed for running with another set, although I didn't see the other set around.