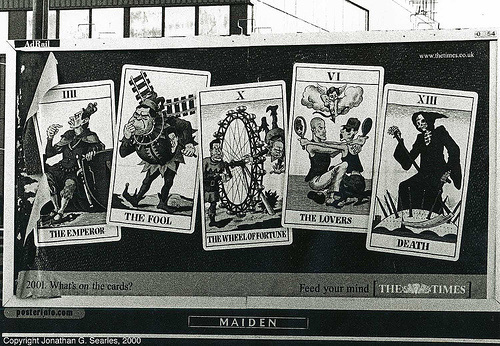 Although I could have taken this in 1999, when I was actually taking a photography course at the University of East Anglia, I'm fairly certain this was actually taken by me independently, and then developed in the darkrooms of the UEA Photo Society. I'm not sure, though. The year on the poster, of course, is referring to the 2001 UK election, as this poster is ridiculing Cherie Blair's obsession with mysticism and superstition. In the end, of course, Britain was doomed by a weak opposition and voter apathy to 4 more years of Blairite incompetence and corruption, which included the Iraq War, and yet another unsuccessful attempt to get rid of him, so one has to consider this poster as being unsuccessful, if indeed The Times dared to take a political position against Blair. It is a bit of an ethical grey area for many journalists, to be sure, when a serious newspaper like The Times does something this blatantly partisan. I've always thought that this photo was very interesting, though, in that it perfectly captured the mood of the times (no pun intended), and even included a reference to the British Rail Crisis, all in a major railway station! :-)
Suggested groups:
Comments