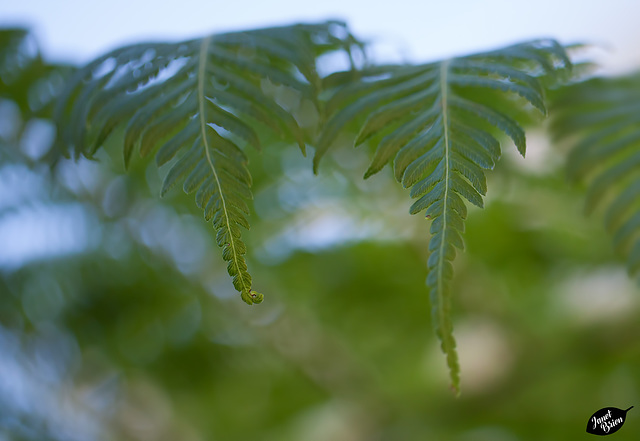 Steve and I have had the chance to stay at Nathalie and Brian's home in San Anselmo on several occasions but this visit was the first time I'd brought my camera. I was really excited because I knew what was in store for me. It seems like anywhere inside or out, there are super cool things to take pictures of.

One of the first places I attacked was Nathalie's amazing patio. She's got all sorts of potted plants and bushes and on the walls are moss and lichen. It's a bit dizzying to decide where to start but I made a beeline for her tree fern, what I call a "dinosaur fern", and these plants are among my very favorite.

Because of the low light I was using my macro flash and as I clicked away, I became aware that Nathalie and Steve were talking in the kitchen just a few feet from me inside. Nathalie was wondering what the odd flash of light was, and then Steve noticed. I couldn't help grinning to myself as Steve realized it was my flash and explained to Nathalie. "Ohhhh!!!" I heard her say, as Steve went on to tell her how versatile our flash is. (By the way, if you are looking for a similar flash at a fraction of the price, I'd recommend this one!) She stepped out to see what I was doing and found me literally crawling around under the fronds of her fern. I giggled and told her that I am often splayed on the ground in very strange positions when I'm taking pictures, and have been asked on a number of occasions if I was ok and not, perhaps, dead! :D

The biggest problem that I had with this fern was that the unfurling balls of leaves that I love to photograph are quite dark and indistinct and so they aren't as dramatic as others I've photographed in the past. However I think I managed to get some nice pictures and I've included four insets in addition to my main image. I played with some textures on a couple of them because I thought the bland background could use a bit of dressing up. I will definitely try some different ideas the next time I get the chance to take more pictures of Nathalie's awesome tree fern!

Pam, I was surprised that you have no fern pictures in your photo stream! I'm going to guess that they don't grow on your property? I thought we didn’t have any on our property but one day I just about fell over when I discovered one by a seasonal stream. Another time I found one on our hillside. They aren't big but they are still super cool! I hope you have had a nice day…you are always in my thoughts!

NO.. THEY DO NOT GROW EVER IN OKLAHOMA !!

Eunice Perkins club
Lovely fern shot! I have bush ferns growing in our yard. N.Z. is full of ferns. The National netball team is named the Silver Ferns.
21 months ago. | Permalink

Pisti club
What wonderful pictures you post every day for Pam! A great series, I will continue to visit your photostream. Greetings from Pisti (Germany)
21 months ago. | Permalink

Jaap van 't Veen club
What a lovely series of images Janet.
I especially like the three PiP's with the details. Ever made such a picture in New Zealand.
21 months ago. | Permalink

Andy Rodker club
Love this shot and the PiPs! Have a great weekend! Like Pam, I miss English ferns. We get some here in central Spain but they need a more humid atmosphere to flourish well, I think!
21 months ago. | Permalink

Ulrich John club
This green and the composition ! Super, Janet !
21 months ago. | Permalink

Gudrun club
Your fern photos are all gorgeous! I love ferns, we get a few varieties in Germany but nothing compares to New Zealand ferns. The Maori call the unfurling leaves "koru" , they are the symbol for rebirth, new beginning.
21 months ago. | Permalink
Janet Brien club has replied to Gudrun club
Oh how cool is that?! Koru! TY for that bit of info! :)
21 months ago. | Permalink

Zulma club
Like eyelashes!! So cool my dear Janet. Have a great weekend and with better weather than ours...stormy times for us.
21 months ago. | Permalink

Ruth club
This is wonderful Janet, superb focus and DoF. Excellent shot of these pretty ferns.
21 months ago. | Permalink

Keith Burton club
Now that I've stopped laughing at the image I have in my head of you crawling round the floor of someone's patio I can say that these images are just splendiferous Janet..!! In the main image you've done a splendid job of making the tips of the ferns stand out from a very similar background, yet still kept the essential details. Great work! I also love the PiPs of the unfurling leaves............they are really fascinating, and so fantastically sharp and detailed where they should be.

Betty【ツ】 club
I answered you under my picture! again ;o)))

Roger (Grisly) club
Ferns are amazing plants and you have captured these perfectly Janet, They are very prolific in the wild but great to photograph never the less.
21 months ago. | Permalink

RHH club
Love the ferns in spring when the fronds are just uncurling. If we can't find anything else to photograph on a spring hike there is always those. Appreciate too the information on the flash. I have a ring flash but have to get back to using it again.
21 months ago. Edited 21 months ago. | Permalink

Jenny McIntyre club
Brilliant photos here Janet - I've actually got a couple of ferns growing on my kitchen window sill at the moment, it hitched a lift with some compost I got for my hyacinth!!!! I have many ferns here in my garden - it must be the climate we have here.
21 months ago. | Permalink