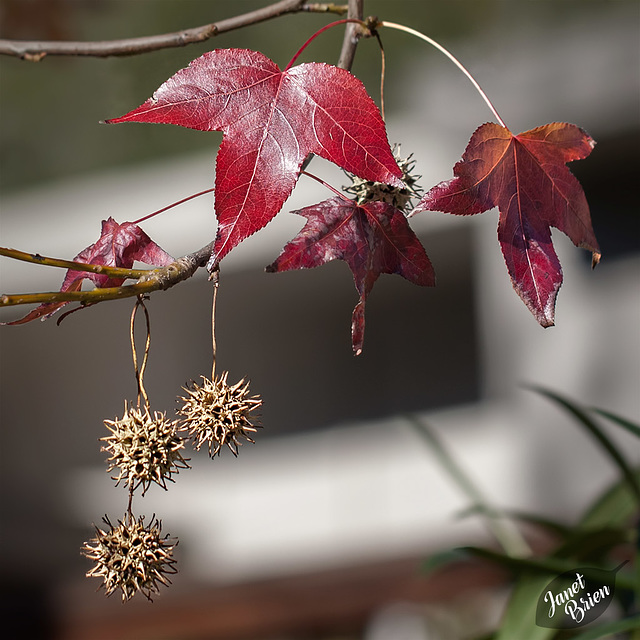 This morning I was surprised to find that it wasn't raining as forecasted but instead merely drizzling. With the sprinkles came a heavy fog and I had a peaceful, lovely hour+ of walking. I spent the time admiring the way the trees slowly became obscured by mist--it was so pretty. I also enjoyed hearing the honk of geese and the caw of crows which alerted me to look up and watch. The birds would slowly materialize overhead and then disappear into the mist again—so cool to see! The drizzle was heavy enough that by the time I stepped inside after my walk, my sweater and hat were drenched. They are sitting by our heater to dry during the day. (I also included an inset to show you what it was like this morning!)

Today I'm sharing a trio of pictures from our visit to San Anselmo. On our second hike, we wandered back through the streets of San Anselmo. This adventure gave me far too many subjects to photograph but perhaps that was a good thing. After all, I did come home with over 1400 pictures and that's probably quite enough, don't you think?! I was very lucky with the quality of pictures too, so I'll be posting images from our visit for a long while or until I shift to another project. For now, I'm having a great time going through the photos!

The main image and two insets show the seed pods of the American Sweetgum tree. I have been in love with these spiky balls ever since I discovered them some years ago. Oddly enough, I have no photos here on ipernity. I know I've taken pictures but somehow I've never processed any. That seems so crazy given how much I like their wonderful shapes. Well today I'm fixing that issue! My main image shows how ornament-like these cool seed pods are and showcases their cool shape and texture. The insets are bokeh-fests and also display the beautiful star-shaped leaves. In fact, I mistakenly thought these leaves belonged to Maple trees due to their similar appearance. It's only until you look closely and compare them that it becomes clear. Leaves that are much more star-shaped belong to the Sweetgum.

Pam, I looked to see if you had any pictures of Sweetgum pods but no, I guess you don't have any nearby or surely you could not resist their awesome shapes! However, I did see that your Datura Moonflower creates seed pods which are quite similar and your picture is just terrific. I sure do love the way you see the world, it's a delight to look through your pictures. I hope that you have been having a nice day with your husband and your canine children! Hugggggs from southern Oregon!

Suggested groups:
55 comments - The latest ones

Admired in:
www.ipernity.com/group/tolerance
20 months ago. | Permalink

Pam J club
I LOVE SEED PODS ! THESE ARE BEAUTIFUL

NO.. SADLY NO SWEET GUM HERE.

I HAD ONE OF MY ,MANY STRAY KITS SPAYED YESTERDAY. SHE IS A SWEET GIRL.. A TWIN WITH HER BROTHER. I ALSO SHELTER AND FEED AND WE GET THEM VETTEDABANDENED "BARN CATS" . SHE IS DOING FINE. BOTH SHE AND HER TWIN HAVE THE LONG COAT GENE.
20 months ago. | Permalink

Eunice Perkins club
The seed pods are fabulous and you have presented them beautifully accompanied by the lovely leaves!
20 months ago. Edited 20 months ago. | Permalink

HelenaPF club
a splendid capture dear Janet as always!!!! Have a great and beautiful day in your Oregon so far of France! Big Hugs
20 months ago. Translate | Permalink

Nouchetdu38 club
Like a Christmas tree with its decorative balls and stars!*****
20 months ago. | Permalink

tiabunna club
I'd never heard of these but they are very photogenic, as are the lovely coloured leaves. That is a beautiful pano through the misty rain.
20 months ago. | Permalink

As usual, you've completely nailed the focus and depth of field. The fine detail is amazing. I love the beautiful red leaves as well.

The images in the PiPs as always, are a good as the main subject. I especially like the third PiP, which is beautifully atmospheric..!!
20 months ago. | Permalink

aNNa schramm club
three stars *** for the three stars :-))
what a beautiful remnants of autumn
20 months ago. | Permalink

Ulrich John club
What a nice arrangement ! Love this, Janet !
20 months ago. | Permalink

dgmphoto club
Lovely images and great use of depth of field with the insets
20 months ago. | Permalink

Ruth club
This is a very beautiful image Janet, the detail and focus are excellent, and I adore the colour. Well done my friend.
20 months ago. | Permalink

polytropos club
Great shot! I like the second PIP with its amazing colours and light!
20 months ago. | Permalink

Betty【ツ】 club
In France we make chocolate truffles that are blue and look like your little sea urchins, it's a delight! :o))) Now that I've seen your picture, I want to, but you can't find them everywhere, so I'll have to wait...... aaaarghhhhh ;o)) **hugssss**
20 months ago. | Permalink

RHH club
Beautiful leaves and seed pods and a gorgeous photo. This tree, often planted in place of Elms that have died, has been voted the messiest suburban tree and some towns that originally encouraged planting them are now offering to remove them. Interesting that I was photographing something similar this morning, only I think it was Sycamore pods.

We had freezing fog this morning and it was incredible outside. The hoarfrost on those pods and on everything else was amazing as were the foggy landscapes. Supposed to have several more nights of the same. Can't wait to be done with the Joshua Tree NP photos and get to some of those I've taken around here.

Your landscape also reminds me of what I saw when out with the car this morning, except we have snow and all that frost. You have such a beautiful view from your home and I envy you that. We have woods in back but not much of a view. In fact, if I want to photograph the sunrise I have to get out beyond our yard because of the telephone/power lines that otherwise get in the way.

Haven't gotten out for my walk yet since we have our son home this morning, but am hoping the frost lasts long enough that I can get a walk and some photos early this afternoon. Did get a few photos this morning nd now that I've had my walk and another drive around I've taken about 200 photos.
20 months ago. Edited 20 months ago. | Permalink

Susanne Hoy club
What a beautiful still life with red leaves and filigree seed pods. The seed capsules look like the decoration for a Christmas tree.
20 months ago. | Permalink

Anton Cruz Carro club
You have an innate ability to find beauty in spaces or simple objects. A sensitivity that I envy of women. I feel healthy envy.
20 months ago. | Permalink

Roger (Grisly) club
Another lovely series Janet, I especially like the wonderful composition and fascinating content in the main image,
20 months ago. | Permalink

Joe, Son of the Rock club
What a beautiful rich deep red colour of the leaf. The leaf also has a lovely texture, which is enhanced by the excellent lighting. All the best, Joe
20 months ago. | Permalink

Boarischa Krautmo club
Beautiful images.
I looked up the Sweet Gum Tree and found that it's branches are sought after for use as divining rods. So what did you find? ;-)
I like that foggy mood in your right inset, too.
20 months ago. Edited 20 months ago. | Permalink

micritter club
Fantastic composition, colors, details, light, shadows, and bokeh. In addition, being able to get all the components in focus at such a narrow depth of field is in itself an accomplishment..
20 months ago. | Permalink

Gudrun club
The seed pods look like spiky stars, all of your photos are lovely with ideal DoF! What a fascinating mood in the panorama, I guess I'd have stayed inside;-)
20 months ago. | Permalink

Rosalyn Hilborne club
Wow! They are amazing! New to me too. They look like festive baubles or even pretty earrings! Again the PiP's are so lovely. I am always drawn to misty pictures for some reason. Maybe because they look so dreamy....what does that say about me, ha ha!!!
Have a great weekend Janet.
20 months ago. | Permalink

Jenny McIntyre club
I've not seen these before, although they are similar to other plants I've seen around here. I love the shape of the leaves and the colours are just great. As for your view with the fog/mist - wow. I can see why you could hear the birds cawing way before you could see them.
20 months ago. | Permalink

L. L. Wall club
Attractive photo and Pip"s (and, lawd, what a landscape you get to look out over) ...

And it is surprising you have Sweet Gum trees near you as subjects; I thought they were a Mid-Atlantic and Southeast US species. The Sweetgums around the Chesapeake Bay region have leaves with 5 distinct pointed lobes, like a star ... and such a cool scientific name: "Liquidambar".

People complain about Sweetgum seedpods being messy, Sycamore too; but both are gorgeous hardwoods ... stuff falls from trees, it just does; people should get used to it if they want the benefits of having trees nearby. Little mentioned as messy, but maybe even worse, is Black Walnut: webworm webs, leaflets, leaf stems, and the walnuts themselves falling like little cannonballs from high branches -- don't park your car under a Black Walnut tree in the late Summer, or be prepared to call the Safelite windshield guys.
20 months ago. | Permalink