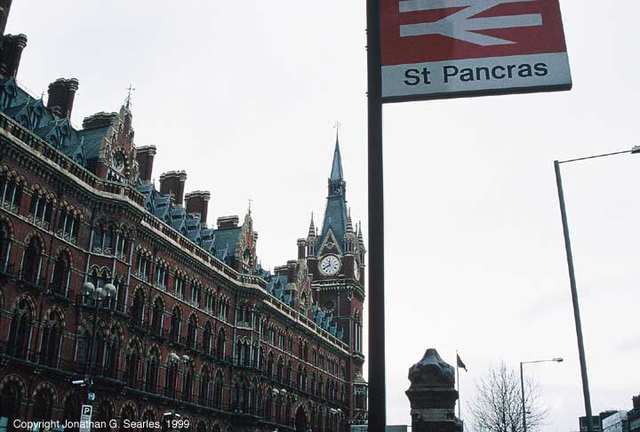 St. Pancras station, and the Midland Hotel which is incorporated into the front of the building, was arguably the most beautiful, spectacular commercial failure in the history of London when it was constructed in 1867. Overwhelmingly the most grandiose and beautiful of London's stations, it was redundant when (over)built, and a product of the rivalry between the various private companies vying for the London market during the mid-19th Century. The Midland Railway, the original owners, spent 2,000,000 pounds on its construction, enough so that the company never recoupped the loss, especially since someone made the blunder of building the hotel without modern plumbing!!! Although the station was built as a combination passenger and freight station, with the underground freight handling facilities specialising in overnight beer shipments, little of the station has ever been put into full use. This may have a happy ending, though, as since I took these photos the building has been undergoing a massive renovation to serve as a successor to Waterloo International once the Channel Tunnel Rail Link is built, with the old beer cellars being reused for dedicated international platforms and a car park.
Suggested groups:
Comments