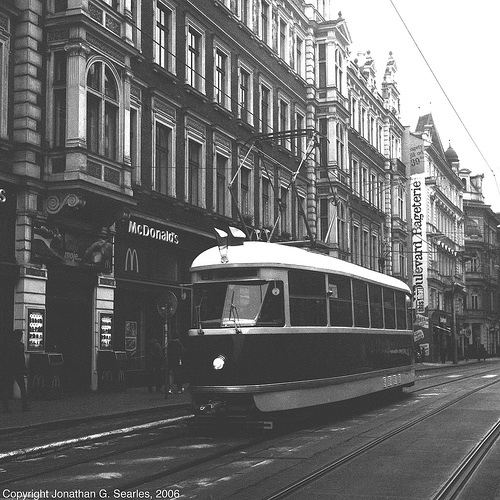 #5002 is the second-oldest Tatra tram still in the DPP fleet, and it is now only used on the historic tram service, #91 from Depo Stresovice-Vystaviste. Even on this service, it usually doesn't work except for on November 17th, the anniversary of the Velvet Revolution, which is also usually the last day of operations for #91 before the winter break. I was very, very lucky to be in the right place at the right time to get this, as I only have two other photos, both of them horrible, of this tram in service. This photo, also, was nearly a failure, as my Ikoflex was set wrong. I was in such a rush to get the shot that in my haste I pointed my light meter at the sky without even realising it, and as such I barely underexposed. I talked to a photo student, though, who was able to clean up the shot in the full version of Adobe Photoshop (on a high-end computer with a high-end 4000 dpi Nikon negative scanner), and I worked on it a little bit, too, and now I think it looks alright.
Translate into English
Suggested groups:
Comments