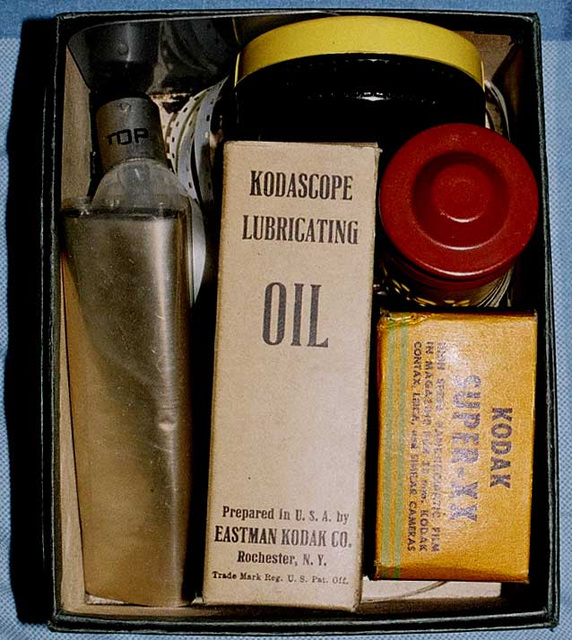 You know what I mean. :-) Everybody fantasizes about finding something really interesting buried away in one of their closets that they never knew they had. Here's my discovery. :-) Recently, while handling my vintage slide projector, which I don't know a whole lot about since my Mom got it for me on a whim for only $20, I decided to open the mystery box that had come with it. I assumed I would just find some spare bulbs, but having heard some very interesting stories on Flickr I figured I would live out my fantasy. I was very surprised to find that my imagination, for once, was absolutely right. In the box was exactly what you see here. Some spare bulbs, as I knew would be in there, a spare lens (I'm assuming for the projector), a package of lubricating oil, and some vintage film, all of it of course expired or used. There's some 8mm there, if you look very carefully, which appeared to be movie film, which most 8mm film was, a roll of Kodak Super-XX 35mm black and white, expiration date 02/49, and a roll of mystery 35mm Kodak film still in the canister, with it being left to mystery whether it was ever exposed. I'm very tempted to open it in a light bag one of these days and see what it's situation is, actually, although most stories I've heard about developing vintage super-expired film haven't been particularly positive. At least I can say I have it. :-)

Thank you to Demetrius Chryssikos for marking this photo a favorite!! :-)
13 years ago. | Permalink

Thank you to Kommasser for marking this photo a favorite!! :-)
11 years ago. | Permalink