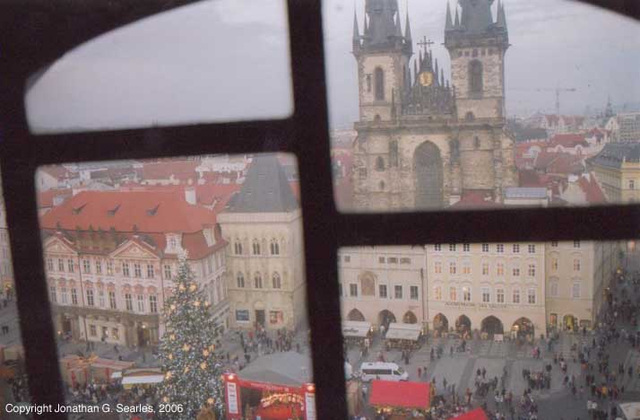 Until this day (which I think was Sunday, the 3rd of December) I didn't know that the general public could go up in the clock tower on the Stare Radnice. It just seemed incredibly unlikely to me, but in reality many of these towers are open to the public in the Czech Republic, and this one is especially famous. This is, of course, a very Christmas season shot, but in reality more attention was being devoted to the upcoming St. Nicholas Day on the 6th. On the day before St. Nicholas Day, for those who come from countries where it's not celebrated, St. Nicholas (you know, Santa Claus) tours cities in the evening accompanied by an entourage of angels and devils, looking for good and bad kids. It's a night of lots of screaming, fireworks, and the kind of anarchy that is normally reserved in the United States for Halloween or in Britain for Guy Fawkes Night. It's a little crazy, of course, but in this shot it was still a few days away, so they had a stage set up to do folk dancing instead.
Suggested groups:
Comments